Thanks to fake news, there’s a surge of interest in “real news” sites, which could turn the news industry around

We’ve written a bit about fake news lately. How Google is banning it, how Facebook is blocking it, and how it’s being blamed for the results of our presidential election. But one thing I find interesting is how widespread fake news during the recent presidential election is drawing readers towards “real” news outlets.

Actress Alyssa Milano, who’s been quite an activist in social media, recently told her 2.97 million Twitter followers to stop reading fake news and to start getting news from a credible news outlet. She posted a Tweet with a screenshot of her recent order of the New Yorker. 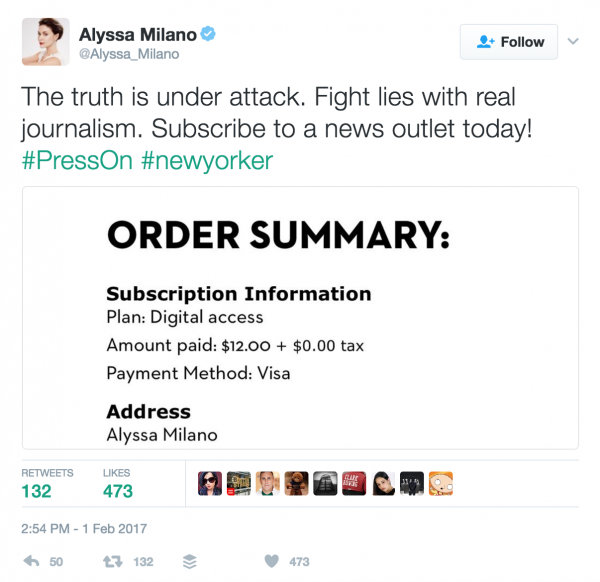 What I love about this, is that she cites “real journalism” as her reason for subscribing, and this is something reputable news outlets have been trying to sell for years. While less than kosher news sites have been popping up every day stealing the spotlight in search and social, genuine news outlets with trained journalists and fact-checkers on salary lost the respect they deserved.

Not so, anymore. At least if more people like Alyssa Milano use their soap box to spread the word about “real journalism.” I also love that she subscribed to digital access (booyah, one more point for Gryffindor!)

We often praise The Economist for refining its content strategy, expanding its brand strategy and keeping its revenue strategy subscriber-based. On the other hand, we go back and forth with publications like TIME, because TIME’s got content down, but is losing its brand in the mad dash to become CNN news.

And TIME isn’t the only one. It’s time to go back to its roots of investigative, interpretive journalism as its primary content strategy, stop trying to compete with Yahoo, CNN and every other soundbite medium as a brand strategy, and forge an entirely new revenue strategy that relies more on its products than its advertising.

One of the problems that mass media brands struggle with is the fierce competition for advertising in the digital age. If you can advertise on CNN or Yahoo and be seen thousands of times a minute, all day long, why would you bother with TIME?

The answer is: You won’t. So when I say TIME has to get back to its roots, I mean it has to not only remember that its primary function has always been investigative journalism, but also that journalism’s function is serving readers first and advertisers second.

Meanwhile, publishers at Hearst, Meredith, The Atlantic, The New Yorker and Foreign Affairs wax eloquent about their journalism. These folks are confident that real journalism – not general news-gathering – is a valuable commodity even as they leap into the digital world.

Any brand who has been competing with less than stellar news outlets: it’s time to stop. Writing shallow listicles and “you’ll never believe” titles are what separate the rest of the internet from prestigious sites, so reputable news publishers shouldn’t be copying this behavior.

This means refocusing content strategy on interpretive journalism, discarding soundbites, 30-second “news” videos and other trappings of an Internet news source, and putting its service journalism front and center. TIME has always been the home of the best writers, the best thinkers and the most compelling topics, but these things have been somewhat lost in the desperate search for relevance in the digital world. (And by the way, I’m not picking only on TIME here, they’re only one example.)

Lose the party tricks and focus on what people need from a reliable news source: accurate, investigative news.