During our Twitter for Publishers webinar a couple months ago, we had Brian Dresher from USA Today as one of our guest speakers. Dresher actually contacted me after I announced the first two speakers of our webinar, Kathy McCabe of Dream of Italy and Shirley Brady of BusinessWeek.

In an email to me, he wrote, “The quote in your article about newspaper use of Twitter caught my eye, ‘Newspapers for example, are largely using Twitter as a glorified RSS feed,’ because  USA Today has created a strong Twitter presence by largely avoiding that very impersonal communication.”

This would make USA Today one of the very few newspapers who have been able to effectively use Twitter not only for content distribution but also as a communication platform.

With that, Dresher was our third and final speaker for our Twitter for Publishers webinar, which now had a newspaper, newsletter and magazine publisher, all sharing their unique perspectives and strategies.

Now it’s understandable that any newspaper on Twitter is going to push a lot of content. If they didn’t, they wouldn’t be doing their job correctly. However, there’s a difference between pushing content and publishing content.

The Wall Street Journal doesn’t play with their audience. Their @WSJ Twitter account simply publishes headlines. If you take a look at any of their other twitter accounts, you’ll find the same method: push, push, push. No responses to their 101k followers, no questions, no added personality to any of their headlines.

In other words, there is no human behind the feed. Those 101k followers are using the Wall Street Journal as an RSS feed, because that’s really what it is. And that’s OK, but it’s not why people use Twitter. People use Twitter for conversation. 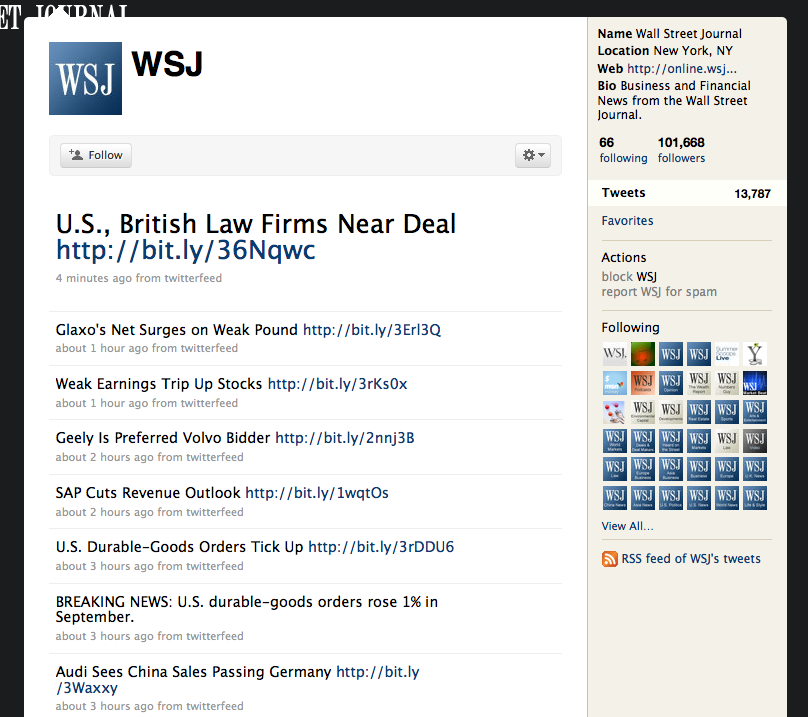 While Dresher admits that not every USA Today account has the same amount of engagement or interactivity, they do their best to be more conversational that most other newspapers. Just from looking at the screenshot below of @USATODAY that I captured this morning, you can see that the top tweet is a re-tweet of someone else and third down is a conversational invite to read a review. 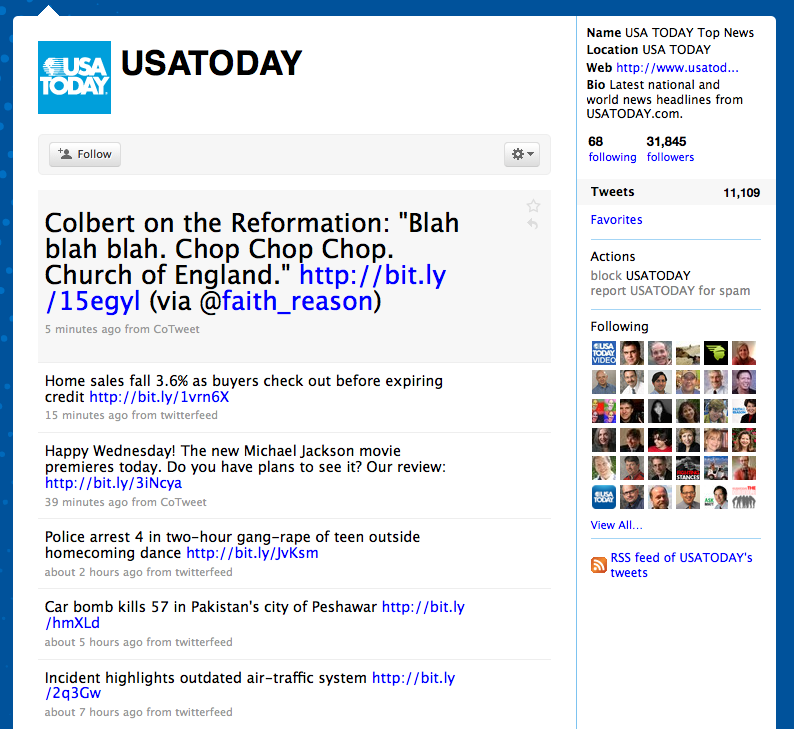 Other accounts such as @USATODAYVideo and @USATinteractive that aren’t seen as the main account, can afford to be even more conversational because the audience is more niche. They even have a @usatoday_nfl account that is big on using hashtags, clearly identifying that a real person, and not a robot is constructing their tweets. 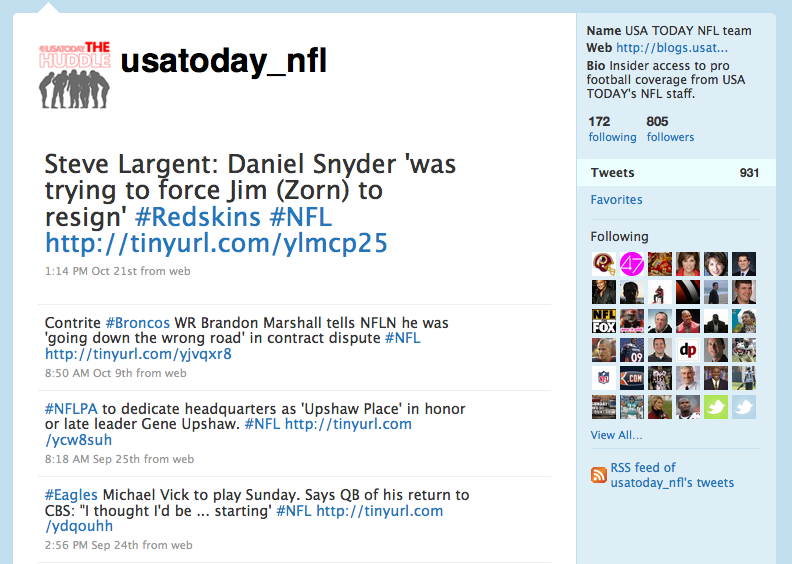 Here’s where USA Today becomes very unique from most other newspapers on Twitter.

It may seem risky for some publishers, but what USA Today done is encourage their reporters have their own Twitter accounts. So if you’re looking for Mary Brophy Marcus, a medical reporter, you’ll find her at @BrophyMarcUSAT, and her profile will link to USAToday.com.

If you’re looking for 26-year veteran of their Life section, Nanci Hellmich, you’ll find her profile under @USATODAYdiet, which links back to the dieting column of USAToday.com. 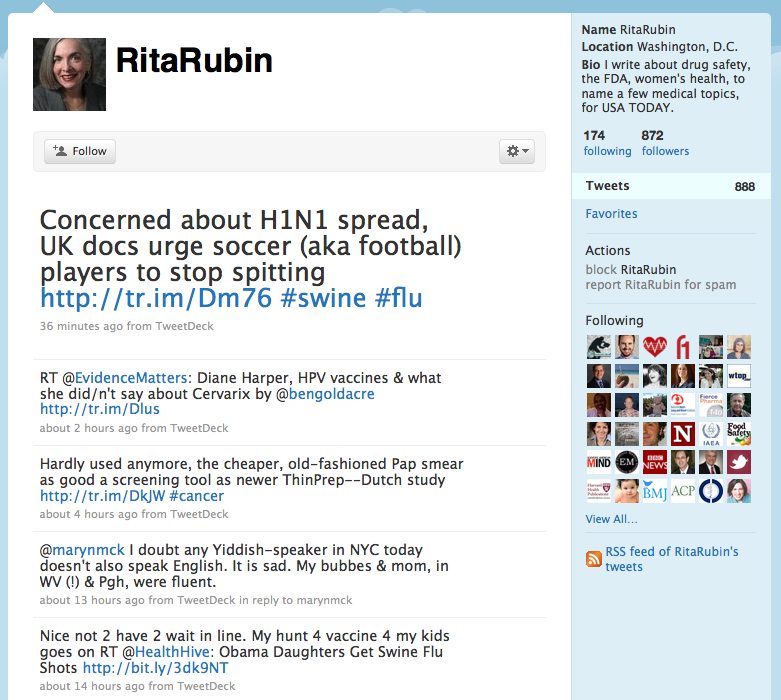 If you take a look at all of whom @USATODAY follows on Twitter, you’ll find dozens of USA Today reporters with their own profiles and personal introspective. 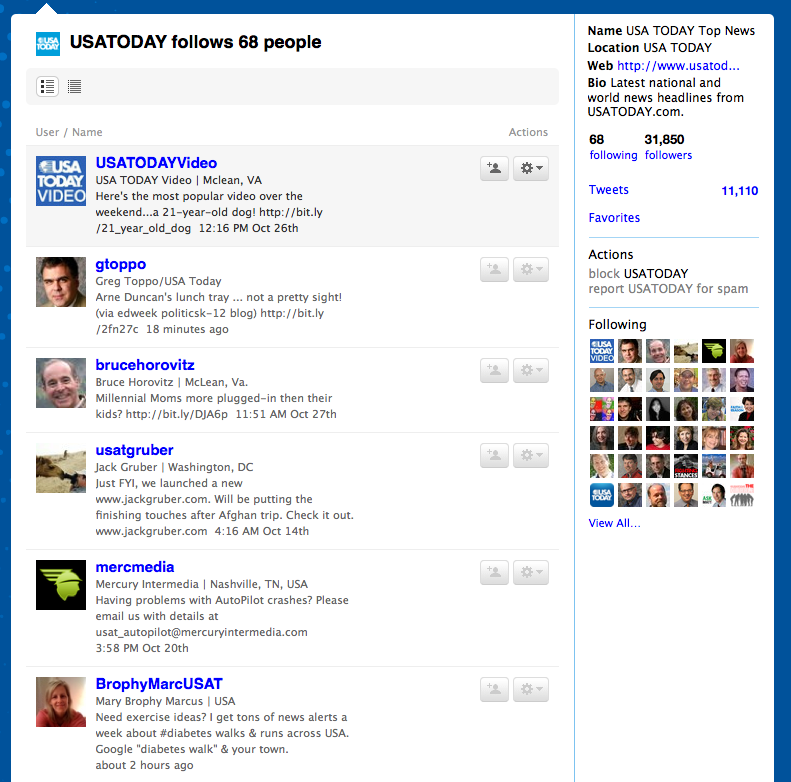 When Dresher discussed the method of posting conversational tweets in conjunction with ones that link to an article, he said, “none of these tweets warrant their own blog post. What I try to articulate internally is that Twitter is a great way to compliment your content, not substitute for it. For those users who are already engaged with a particular journalist, this gives them a way to keep up with what that journalist has to say.”

Some other examples of engagement that Dresher pointed out during the webinar included:

Meet Ups – @CruiseLog – Anyone else going on Carnival’s Bloggers Cruise this weekend? I’ll be on board (and blogging) starting Saturday and would love to meet up!

Promotion/Events – @PopCandy – Remember we’re at the Hilton Bayfront, not the Gaslamp! Turn right out of the convention center. Party is on. #sdcc

Opportunity – @USATODAYweather – Send your weather photos to USA TODAY. We publish the best online and in the newspaper. #weather #photography

Engagement/Traffic – @USATmedialounge – With more than 1,700 comments, there’s a lot of interest in Iowa’s decision on gay marriage. Add your thoughts here: http://ow.ly/21o5

Story Leads – @CAroundTheWorld – We’re still interested in talking to people who are canceling trips to #mexico because of #swineflu. Email me at cegray@usatoday.com.

So, how are you managing your Twitter feed? If a publisher that produces as much content as a newspaper can communicate this effectively with their audience, what can you do?

Update: I’d just like to add that after posting this article on Twitter, this response from @USATODAY came in. Case in point! 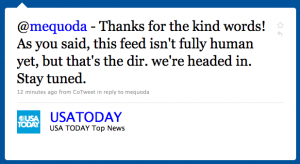 Watch the 90-minute Twitter for Publishers webinar right now when you subscribe to Mequoda Pro for $297 per year. You’ll also gain access to 14 more training sessions for online publishers, plus bonus spreadsheets, tools and reports. If you prefer to own it, you can grab this webinar with USA Today, BusinessWeek and Dream of Italy when you buy the CD and transcript delivered to you for $247.