Want to drive customers, subscribers and readers away? Follow these examples!

Sometimes you want to drop a love bomb on someone.

For me, this was recently a restaurant I discovered in Boston’s North end called Davide. About a month or so ago, I’d tuned into Gordon Ramsay’s Kitchen Nightmares and saw Davide go through the gut-wrenching transformation that all of the restaurants on that show go through.

Most importantly, the cook and co-owner Frank, was burned out. By the end of the episode, Frank had started rocking out new recipes and got his spark back. The food was delicious.

As a foodie, I knew I had to go pay them a visit, and I did. The dinner was excellent. Frank even tested out a new dish on us that still makes my mouth water to think about. I was excited and couldn’t wait to share my experience with everyone so that they could start getting more customers.

I left Davide ready to shout them out from the rooftops.

As a savvy social media user, I immediately went to their @DineDavide Twitter account and stopped in my tracks when I saw these tweets: 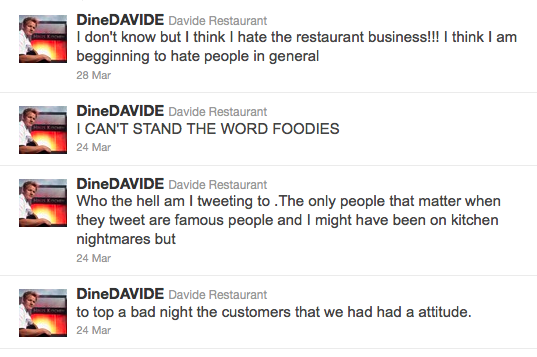 How in the world could I ever give a shout out to @DineDavide, when I knew that my other foodie friends would see this type of customer hatred? Note: Frank doesn’t run the Twitter account, his brother does.

You probably already know about all the renegade tweets that have been popping up, when businesses choose to let the wrong people tweet from their accounts.

In some cases, it’s an accidental slip in their Twitter app where someone tweeted from the wrong account. In other cases, it’s just plain ignorance.

We’re a little luckier in the publishing industry where most of what we push is content and not opinion. However, it would be very easy for a publisher to allow someone behind the Twitter wheel who doesn’t use a filter.

Giving access to someone on your team should be a bigger deal than it is.

The team at @MarcJacobsIntl got a swift kick in the butt recently when they left their Twitter account in the hands of an intern. An intern? How is it possible for an intern to be familiar enough with your brand to tweet about you in the first place?

Recently Chrysler even got their motors running when someone dropped the F-bomb on their Twitter account. The tweet was posted by someone at an external marketing company.

So what I’m getting at? Make sure you give them a license before they get behind the wheel of your Twitter account. A single tweet these days can either make or break a company. Pay attention to what “you” are saying to people.