How The Wall Street Journal has incorporated podcasting into its long list of media platforms, and the lessons for other publishers who want to make money podcasting

Podcasting is a portmanteau blended from iPod, Apple’s popular digital audio player, and broadcasting — specifically audio broadcasting via the Internet. Ironically, podcasting does not require using an iPod.

Podcasting is a form of online media delivery in which digital media files, either audio or video, are available for downloading from a website or delivered via an RSS (Real Simple Syndication) feed over the Internet.

You are podcasting if you publish selected media files via the Internet and allow users to subscribe to a feed and receive new files automatically, downloading them to a personal computer or other audio or video player.

Podcasts, or individual broadcast programs, are generally syndicated and delivered as “webisodes” on a regular subscription basis.

Podcasting can be considered the audio equivalent of blogging, providing a platform on which you can promote your business or simply express your opinions.

My personal experience as a Wall Street Journal devotee

My favorite newspaper has been The Wall Street Journal ever since my first journalism course in college, where it was required reading. It may be the world’s best newspaper — global, well resourced, unbiased, focused on its audience, and very well written. I’ve been a subscriber for more than 30 years.

The Wall Street Journal website (WSJ.com) is one of the largest Mequoda System Best Practice online publishers, with content delivered on numerous platforms.

I subscribe to The Wall Street Journal four different ways. First, as a print subscriber — the Journal is delivered to my home six days a week.

Second, I subscribe to the Journal on the Amazon Kindle, where I can enlarge the type size to accommodate my aging eyes and read it on an e-ink display screen that can show up to 16 shades of gray.

Fourth, I regularly listen to The Wall Street Journal This Morning as a favorite podcast via iTunes.

You can listen to The Wall Street Journal from your phone or handheld device using Apple’s free iTunes application to subscribe and automatically download WSJ podcasts including WSJ This Morning, Tech News, MarketWatch, Walt Mossberg, and more. 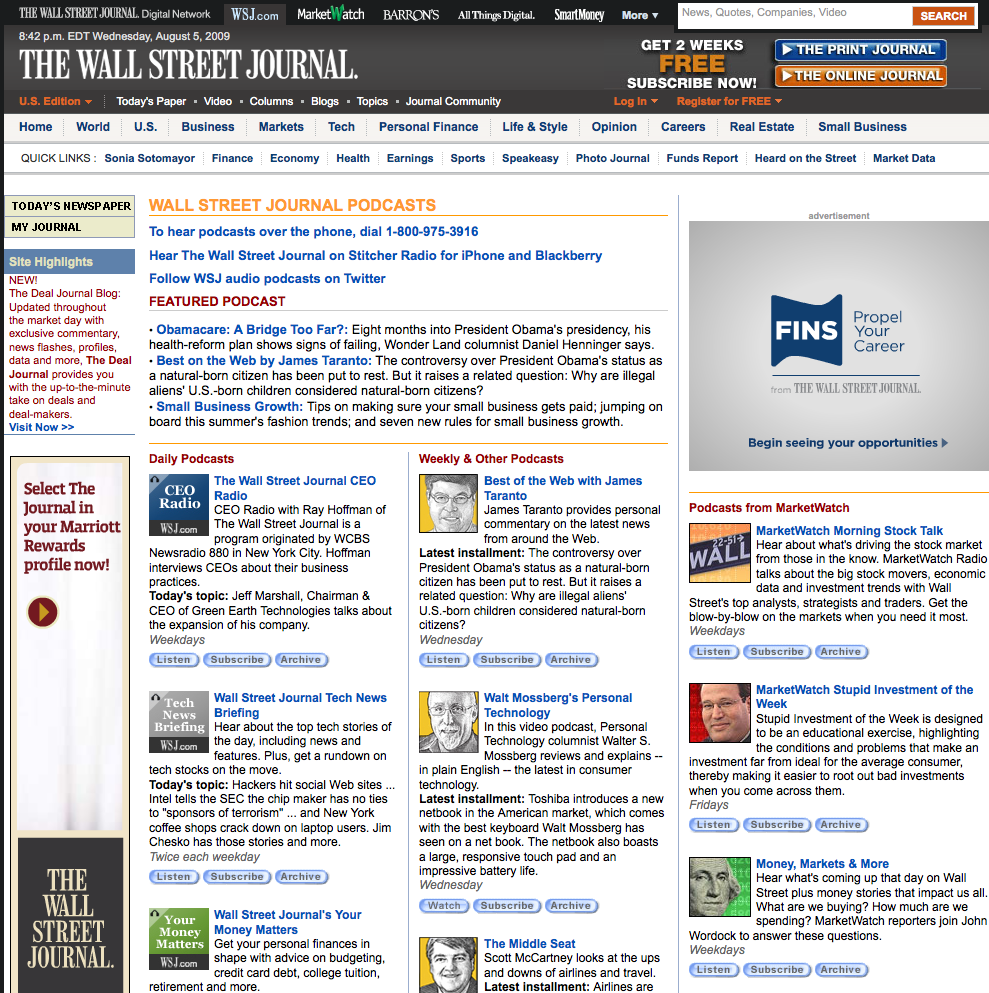 The Wall Street Journal This Morning is my favorite iTunes podcast.

Of all of these, not surprisingly, my favorite podcast is The Wall Street Journal This Morning, which has its own website at http://www.wsjradio.com/WSJAM.html. Host Gordon Deal and news anchor Gina Cervetti deliver a lively blend of news and other intelligent information, plus humor and expert analysis.

The Wall Street Journal This Morning is a magazine style news program with about 30-40 headline and feature stories daily. At the website you can listen to (but not download) a streaming audio of the five most recent episodes.

I’m not certain when it is originally broadcast as a live radio program, but guessing it’s 5 a.m. Eastern. Surprisingly, in the New York City area the live program is not available on a Big Apple radio station, but can be heard at 5 a.m. on WNYM-AM (970 AM) in nearby Hasbrouck Heights, New Jersey, and at the same hour on WGCH-AM (1490 AM) in Greenwich, Connecticut. The content is distributed as a nationwide syndicated program that can be heard on more than 140 stations.

Available as an audio podcast download on iTunes, The Wall Street Journal This Morning generally gets high customer ratings for content, but chalks up frequent complaints that it needs to be available earlier in the day (or else the name needs to be changed). It appears to be posted for daily download as early as 7 a.m. Eastern some days but as late as about 10:15 a.m. Eastern, or later, on other days, which is too late for many users.

The hour-long program actually times out to be about 40 minutes, after the commercial ads have been edited out. On the podcast, you can hear Mr. Deal say, “and the time now is 10 minutes after the hour,” so we know it’s in real time when it’s recorded at The Wall Street Journal studios in New York City.

Perhaps because it’s a nationally syndicated radio program, and globally syndicated as a podcast, the producers of The Wall Street Journal This Morning decided it was inappropriate to include New York commercial content. More likely, it’s a requirement of all Apple iTunes podcasters.

A podcast becomes a blog

But recently I began to notice embedded advertising messages in The Wall Street Journal This Morning. Reminiscent of the late Paul Harvey’s conversational style, Mr. Deal says something along the lines of, “And now, turning to the small business news front, sponsored by our friends at Cadillac…”

Suddenly, The Wall Street Journal This Morning podcast takes on a characteristic of a blog. The contextual advertising unit has replaced interruption advertising (normal radio and television commercials). This conversational message, casually but deliberately inserted into the editorial content, is the equivalent of an embedded text ad.

Sometimes there is one of these contextual ads. Other times there are none. This morning there were two — for Cadillac and Lending Tree.

So, The Wall Street Journal This Morning podcasts go out with all the regular commercial advertisements (interruption advertising) removed, but the conversational contextual ads (inline sponsorships) remain intact.

The Wall Street Journal is steadfastly holding to its paid content business model online and on the Kindle. But radio is a declining medium, just as are newspapers are declining and even dying.

Faced with a diminishing radio audience (owing in part to podcasting), The Wall Street Journal marketers have decided that The Wall Street Journal This Morning podcast cannot prevail with 20 minutes of interruption advertising. The young, hip iTunes audience does not want to hear it. The 20/40 ratio of commercials to editorial or entertainment content is unworkable on a podcast, even if iTunes permitted it.

But The Wall Street Journal This Morning podcast can withstand three or four conversational contextual ads (inline sponsorships). So the producers have cut back the interruption advertising commercials, and replaced them with higher-priced embedded ads.

And by returning to a radio broadcast reminiscent of the 1940s and 1950s, they are using the gravitas of the announcer to add substance to the commercial messages.

Are you old enough to remember Arthur Godfrey? He was one of the first on-air superstars of radio and television, and is considered to be TV’s first great master of advertising.

Mr. Godfrey regularly ignored scripted commercials and ridiculed the advertising agency people who wrote them. Instead, he found that one way to enhance his pitches was to extemporize his commercials, even poking fun at the sponsors (while never showing disrespect for the products themselves).

Today, in the tradition of Arthur Godfrey, Mr. Deal is promoting the new Cadillac STS luxury sedan. And Mr. Deal is endorsing a home loan, mortgage refinance, home equity loan, or auto loan from the Lending Tree network of lenders, “who compete for your business.”

What is the lesson for Mequoda System Publishers?

One exemplary Mequoda System Publisher, Knitting Daily, has launched Knitting Daily TV, a new, public television how-to program that covers a variety of needle crafts, from knitting and crochet to stitching, felting, spinning, and weaving, and guides viewers in learning to make fun yet stylish knitwear patterns and projects.

The program is syndicated by the Public Broadcasting System to more than 200 PBS stations nationwide in 45 percent of the U.S. market. For this service, Knitting Daily pays nothing, but simply provides the content.

Almost any B2C publisher with good content can expand its brand to a broadcasting medium, including podcasting, just as the The Wall Street Journal and Knitting Daily TV demonstrate.

Knitting Daily TV is an instructional television program, but it could also be a podcast using the iTunes distribution platform and selling inline sponsorships. In this model, iTunes would be the smaller, more affordable delivery vehicle, analogous to PBS, and the new podcast medium would be analogous to the old radio.

Podcasting is an ad-driven medium, with either advertising-supported or traffic-supported webisodes. The alternative to podcasting is streaming media, i.e., charging users for digital events such as recorded webcasts. In this model, the programs are originally produced as live events, and subsequently sold as one-shot DVDs, CD-ROMs or digital downloads.

Additionally, in the subscription or membership website model, a publisher can sell unlimited, online access to all its digitally recorded programs, and deliver them via on-demand viewing.

Download our new white paper, Tips for Creating a Successful Podcasting Series, which includes this case study and more!