What does your Klout score say about you?

Clout is defined as “influence or power, esp. in politics or business.” As in, “I knew he carried a lot of clout” or “her clout in the business world.”

Klout is a website that attempts to measure these things based on your social media profiles. The question is, should you care? If you’re not one of the top five publishers on Twitter, then perhaps.

When Klout came out originally in 2008, it was all the rage in social media circles. Basically you can connect your social media profiles to Klout and it will tell you how good you’re doing. A higher score indicates that you’re more social, and that influential people respond to you. While many businesses judge their strength by the number of followers they have, Klout has a much bigger algorithm that judges your engagement.

For example, my my Klout score is 65, which is actually very good. My score is comparable to some folks that I personally respect in the business world on Twitter. My stats on Klout tell me where I’m most effective (and where I get the most engagement). Mequoda is a 48, which is also respectable. On Klout you can see who’s mentioning you and it tries to identify the most important ones. 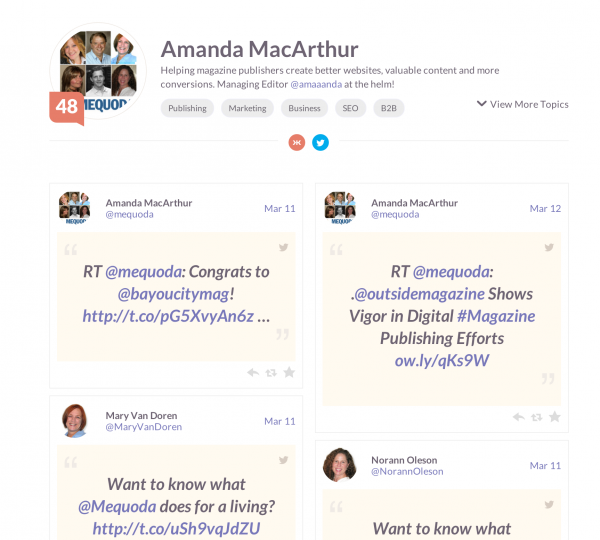 There was a period a couple years ago where Klout changed their algorithm to be more challenging and include more data in their score. Unfortunately that meant everybody’s score dropped and they got backlash. So if you hear people rant on Klout, it’s probably because they were part of that drop and got a slight blow to their ego.

The unfortunate thing about Klout is that they used to give you a ton of data about your score, telling you why they ranked you the way they did. Now they just give you these simple graphs. 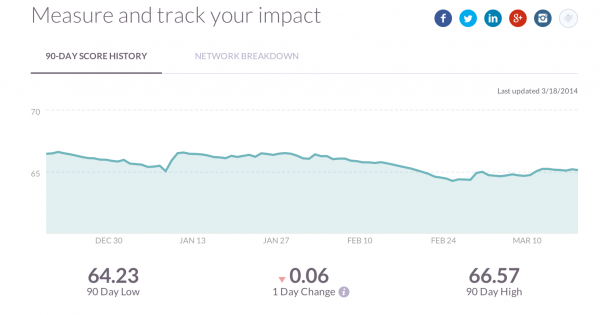 Based on all the data they used to offer though, I can tell you that your Klout score is based on a mix of these things:

Klout also tries to determine what kind of social media user you are. Are you an excellent broadcaster, or are you a social butterfly? They’re cool with both as long as what you’re sending out is being engaged and talked about by the community you’re talking to. Klout identifies Twitter accounts as one in four different types of “tweeters”: casual, persona, climber, or connector.

Although Klout has stripped away most of their great analysis, we came up with a few ways to define different publisher social media personas. Which personality are you? By the way, I’ve put a few publishers on notice. No offense should be taken, I merely want them to be aware of a few areas where they can improve.

The Juggernauts need no introduction. Their brands are as ubiquitous as Kleenex and Snapple. Juggernauts can tweet whatever they want, all day long and still get hundreds of new followers everyday. They shouldn’t be used as examples to follow, because they get followers simply based on brand-recognition.

Examples of Juggernauts are:

With over 11 million Twitter followers, they have no problem posting nothing but headlines. They’re The New York Times, they can get away with that!

People Magazine is a powerhouse. With over 5 million  followers, they could get away with just re-posting headlines. But they don’t; each tweet is written with 140 characters in mind so it’s engaging to followers.

These publishers get Twitter (and their other social media outlets, too) and understand the unique marketing platform, so they engage a ton with their followers and handcraft headlines often.

Examples of Transcendent Tweeters are:

Men’s Health could easily be considered a Juggernaut but they have taken engagement to the next level. If you look at their Twitter stream at any given time, you will see tons of @ replies to people. They are connecting with people just as much as they are promoting their articles.

Distant Cousins are publishers who have Twitter accounts but don’t. Their readers would love to connect with them on Twitter, they just need to tweet a little bit more.

Field & Stream  spent a lot of time as an inactive account that mostly posted headlines. Recently their Klout has been climbing because they’ve been posting photos and re-writing their headlines. They’re becoming a pretty dynamic social account and we hope to see them keep climbing. Remember, having a consistent presence on Twitter is key.

Robots are publishers that directly link their blog feed to their Twitter or other social account. No one rewrites the headline; it’s a Twitter stream that is fed by an RSS feed. You never want to be a robot in social media. It’s just not social!

Rewind a few years ago and USA Today was a robot, although it’s possible that social media had taken a backseat ever since Brian Dresher moved over to Mashable.

If you look at USA Today‘s Twitter stream back then, you’d have seen nothing more than an RSS feed. Fast forward to today, and they have a 96 as their Klout score, and can still afford to auto-tweet because they too are a Juggernaut, but thankfully they’ve begun to re-tweet and @ along the way.

Many of USA Today’s other accounts, like their sports account @USATODAYsports, has no problem chatting it up with their followers. In a smart move, they also have many of  their editors on Twitter with official USA Today accounts. So technically, they’re not so bad after all.

What personality does your brand’s Twitter account fall under? Remember, just because you’re using Twitter like a Robot today doesn’t mean you can’t become a true social butterfly tomorrow. 140 characters from now you could be rocking that Klout score like a champ!