If your Audience Development strategy includes finding new followers on Twitter, try out this new tool

Over the past month, word on the tweet street has been that Twitter wants to shut down third-party apps; the apps that are created and monitored by the Twitter community. It was sounding like a monopoly for a while there.

The reality is that Twitter is simply holding third-party developers to new guidelines. If the app doesn’t follow these guidelines, then it’s shut off. ”We need to ensure that tweets, and tweet actions, are rendered in a consistent way so that people have the same experience with tweets no matter where they are,” Twitter’s Ryan Sarver noted in a Google Groups post.

With that said, we’re going to see the demise of many of them we use on a regular basis, surely but slowly.

So with this said, get your butts to FollowerWonk.com right now, and do it quickly. It’s possibly one of the most useful tools out there for finding people in your niche to follow and start conversations with.

What FollowerWonk does, is act as a search engine for Twitter profiles. So if you’re Knitting Daily and you’re looking for knitters to follow, you might type in “knitter” into FW’s search box. You’ll get something like this back:

Now let’s get a little more specific. Let’s say you run a magazine for nurses in the Boston area. You could choose the advanced search options and look for RN’s in Boston, MA like so: 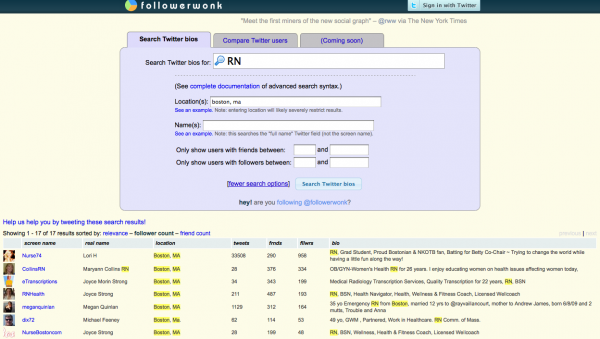 Or perhaps you run several Twitter accounts for your company and you’re wondering how many of your followers overlap and follow you on several accounts. In this example, I’ve compared the main USA Today Twitter account with their Travel section’s account and then with one of their editors. As it turns out, almost 500 people follow all three accounts. 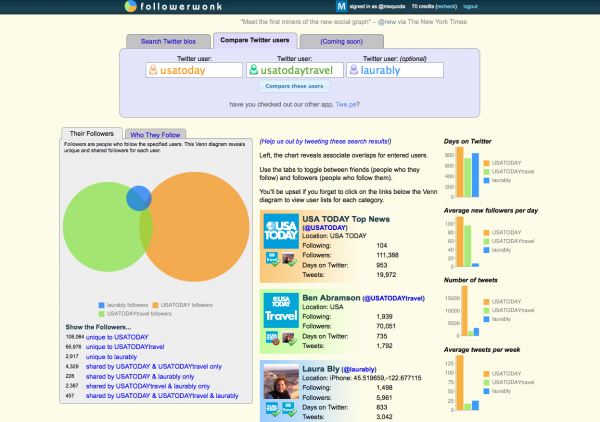 Finally, you can see exactly who is following all three accounts (or just one, or just two). 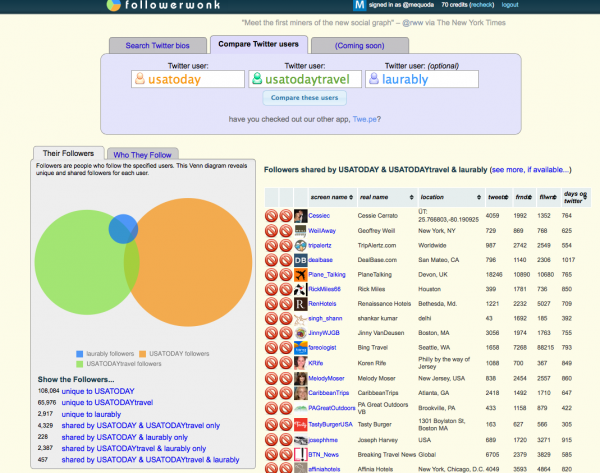 If you’re looking for new people to follow on Twitter, or simply want to analyze who’s currently following you, I’d definitely recommend checking this tool out while it’s still up and running.