Video has always been a part of Mequoda.

For years it was our twice-monthly webinars, which we’ve since uploaded (our retired ones) as blog posts. As I write this, we’re loading 15 new video modules into our digital training product, Mequoda Pro. In July, we added a video preview of our Digital Publishing and Marketing Intensive to the website. Before that, we produced video testimonials for our annual Mequoda Summit. And for the past two years we’ve produced research studies that didn’t end with a digital download, but included  10-15 interview videos, our Digital Native Survey and our Tablet Study. We’re keeping Mequoda’s New Media Producer, Patrick Hughes, very busy.

You may have noticed other publishers increasingly using video, too:

And Bloomberg now creates 200 videos per day, with production studios in New York, London and Asia. They’re even getting $75 CPM for video from advertisers, compared to $15 CPM rate for their website content.

Does video work?  Over the summer we A/B tested video in email and found that video won click rates every time. And we’ve been told by at least one Intensive attendee that the video on our Intensive page was the deciding factor for registering.

Over the course of 90 days we conducted four tests:

Our first A/B test was between video and no video. I don’t think it’s difficult to know intuitively that if you give people a giant call to action front and center, the click through rate will be higher. But, here’s the proof; Email with a video increased our CTR by 29%!

And to be clear, you can’t really embed a video in email. Really, you’re creating a snapshot of the video so that it looks clickable. In our case, this image brought readers to the sales letter landing page where the video is set to auto-play. Normally I wouldn’t auto-play a video, but if they’re clicking on the link, then you can assume that they want to watch it. Why make them click “play” twice? 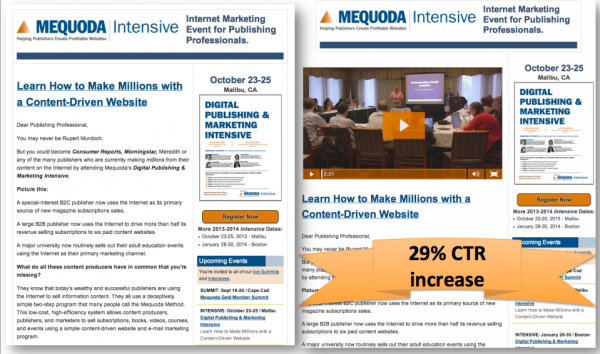 In this test, we used the image that had been our promotions prior to video, versus the video. We found through this test and also by looking at the heat maps on this test that people click on photos too! So, if you’re not hyperlinking your photos, you’re missing a big opportunity! As you can see, video still increased clicks by 9%. 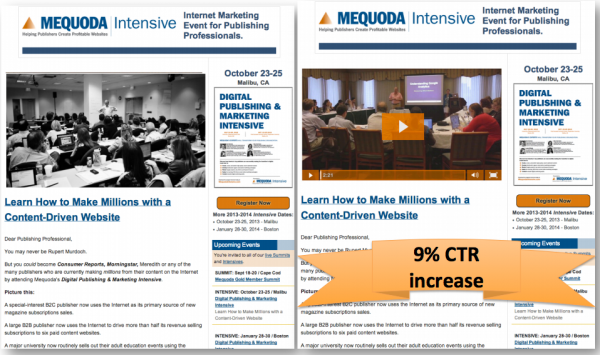 When we presented these test results at the Mequoda Summit this past fall, we didn’t include this test. During the Summit, attendees argued that because the image was black and white in the previous test, people might not have clicked. They suggested another test where I’d use a still shot from the video, versus the full video with the play button. I felt silly trying to prove that giving people a call to action somehow won’t work, but twist my arm, I did another test! To my surprise, there was only a 3.3% lift from screenshot to video. People really do love to click on images, even when they’re as poor quality as a video still! 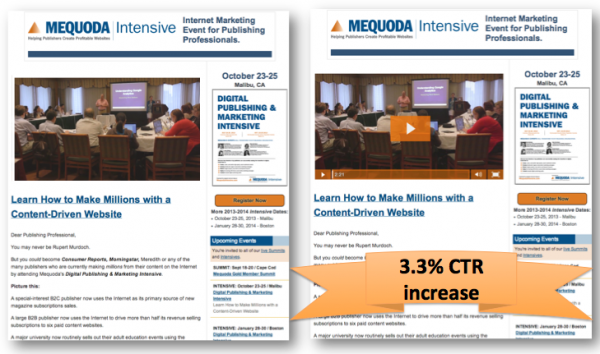 Based on research we already knew, I chose a still for all of these tests that had people in them because I know that people like to see faces. But now that we’d proven video competes well, I  decided to prove that the research is still good and tested the boring first frame of the video versus the one with people in it. A 15.1% boost in CTR on the video with people as the preview showed that people still respond better to seeing other people. We might also be proving that an orange play button works better than a grey one. I smell a test #5 coming on. 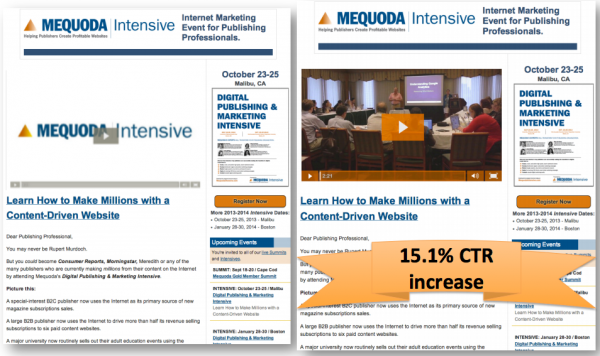 Now it’s your turn. Have you tested video? I’d especially love to see the consumer version of this test. Since our products are so highly priced, it’s hard to get a statistically significant result on whether video actually sells more, other than the verbal confirmations we’ve gotten so far. Let us know your results!

“And to be clear, you can’t really embed a video in email” Embedding video in email (to play) is possible with HTML5. So long as you are using up-to-date email applications or a relatively modern browser (for webmail) your recipients should have no trouble viewing video content. For those with older browsers or email applications they will just see the traditional image and link.

It’s estimated that just over half your email recipients will be able to play video in the email itself. The rest will click on the image link in the normal way.

Its worth noting Google Chrome has had the capability to read HTML5 for a number of years.