Did you ever think that consumers would prefer digital magazines over print magazines? We do, and we think it’ll happen within the next seven years.

And that judgement isn’t even based on speculation.

We just completed our first annual 2013 Mequoda Tablet Study, which revealed that in 2013, 55% of internet users own or have access to a tablet.

If growth occurs at the same rapid pace we’ve been witnessing thus far, we predict that market penetration will be at 85% by 2020. 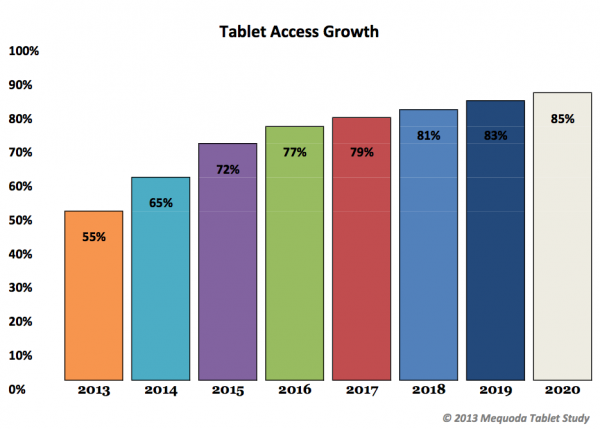 And to align those numbers with the rate at which people prefer digital magazines to print magazines, we start with our 2013 Mequoda Tablet Study results.

Our study, which surveyed over 1,200 tablet users, showed that 26% prefer digital magazines to print magazines. This number is significantly high considering that the iPad (the leading tablet in our study) was released barely three years ago. 0 to 26% in three years? Remarkable!

At the same rate of growth, we predict that number will rise quickly  to 77% by 2020 as digital magazines get better and conform to the user experience that subscribers expect.

And how can we make such a bold statement when people still claim to like the feel of paper?

Digital magazines are better in at least seven ways:

Tablets have bridged the gap between magazines and magazine websites. They’ve created a complete hybrid of information. Once tablet users actually see and engage with a digital magazine, they’re more likely to subscribe.

The rapid consumer adoption of tablets, and an early  preference for digital magazines over print magazines by their users, leads us to conclude that a long-range digital publishing strategy is imperative to the survival and prosperity of every magazine publisher.

That strategy should consider format, partners, and a paywall subscription website to be used as a home base for all paid magazine subscribers. Mequoda advises and guides all its clients in achieving these goals, and you must begin to chart your course, too.

While it’s certain and probable that format and platforms will shift, it seems clear that the web will remain a nexus for all consumer activity and the number one application for tablet users.

Various advantages of digital magazines you have mentioned in the post are making digital publishing vastly growing. And in upcoming years also the demand for digital content will keep growing. The statistics shown in post represents the same thing. So publishers now need to switch to digital publishing along with traditional publishing.

yeah, and non-tablet owners continue to read and subscribe to magazines in print. You are playing with numbers…. What is the percentage of tablet read magazines as compared to the total universe, I or 2%?