Magazine pricing strategy has certainly evolved over the past decade. Back in 2013 we still believed that universal pricing was the best way to handle print, website, and tablet products. And at the time, it was! Today, we’ve evolved our own thinking to incorporate true all-access subscriptions, and we have come up with two prices that are working for the special-interest publishers we work with. But let’s talk first about how we got to this point.

An article in PCWorld published just weeks before the iPad’s debut in 2010 speculated that publishers would continue their traditional pricing models of $10 to $20 per year … and “I hope that’s the model iPad magazines go with,” added the writer. Of course, you would. You’ve been getting thick, glossy, content-rich magazines for pennies since the beginning of time. Why would you want to pay more?

One of my biggest pet peeves is the decades-long policy that magazine publishers pursued – to maintain rate base – pricing their publications dirt cheap. $9.99 was a common price for 12 full issues of a consumer magazine.

That policy trained generations of consumers to believe that magazines are cheap, throwaway products. This seems to have been restricted to the U.S. because when we taught our Digital Publishing Course in London to global publishers a few years ago, eyebrows in the room rose collectively to the ceiling when I mentioned the prices of some well-known American magazines. They were astonished that any industry would shoot itself in the foot in that way.

Our angst over this issue made us practically float out of our chairs with happiness at an MPA Swipe 2.0 conference where Hearst Executive Vice President John Loughlin declared war on cheap magazine pricing now that digital editions are so popular.

What did Loughlin think is a fair price? “19.99 is the start of fair value,” he said, adding that nearly 900,000 Hearst subscribers had already agreed with him. Loughlin wasn’t shy about his position: He also sounded this theme when talking to the Wall Street Journal. “I hope that this is the demise of $6 and $7 and $8 and $9 print subscriptions,” he said at the time.

It was a great soundbite, but we saw $8-10 price points for years after that for most of its print products. However, the company has joined the ranks of all-access publishers, meaning they are offering access to all their products for one price – $20. 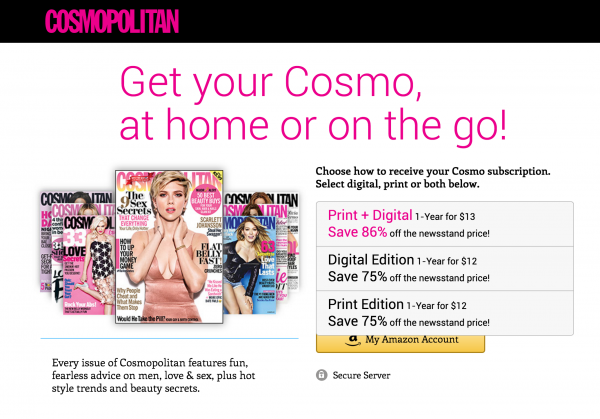 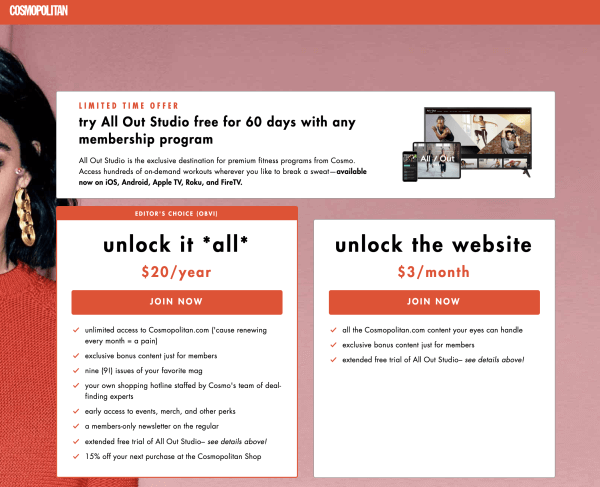 You can still get the magazine in print-only for $12 though you can only find that option in tiny print at the bottom of their subscription page.

If we were in their shoes, we’d price the print product at $18, using the decoy pricing methodology to push them into the $20/year all-access subscription. The jump from $12-20 is a bit too much.

Twenty dollars is still a cheap price for an all-access package. Yes, they’re a consumer brand, but look at Outside+ who has built an all-access package that they charge $99 per year for. Sure, you can get two print magazines out of the bundle, but Hearst has plenty of magazines they could bundle into their all-access offer. Here’s an article we recently wrote about the Outside+ experience.

This is just the beginning of what we’re seeing as a declaration by any number of large publishers that they’re going to be pricing monthlies in the $40+ range and weeklies in the $100+ range.

$49 as the Base Rate for All-Access Magazine Subscriptions

We spend countless hours every week testing offers for the publishers we work with, and as it turns out, $49 has been the magic number when it comes to selling all-access subscriptions which might be either all-digital or include a print edition.
What we’ve discovered is that it doesn’t matter whether your most expensive all-access offering is an all-digital product or product which includes a digital edition, digital library, and print edition; The maximum price is the maximum price, and for most monthly products it’s going to be $49 with a goal of getting to perhaps $59 over the next five years as inflation continues to push up all of our costs.
With that said, we’ve also discovered that in a continuous service world we can afford to discount the introductory prices down into the single digits or perhaps $10 or $12 for the first 12 months.
This pricing strategy seems to beat any kind of short-term introductory offers in terms of the volume of orders we’ll get for any given campaign for offerings that include a monthly magazine or some lower magazine publishing frequency.

$100 as the Base Rate for Weeklies

For weeklies or other high-frequency offerings that have a full price of $100 or more, we find that the 12 weeks for $12 is a big winner with it converting to either a full-price quarterly or full-price annual offer. The 12 weeks for $12 seems to beat other introductory offers like 30 days free or 30 days for a dollar. All three of these offers are still worth testing since we see all three of them winning at least some of the time. For more on that, read 12 Six Sigma Subscription Marketing Offers That Boost Response Rates.
Most special-interest magazine publishers are going to depend upon subscription revenue as their primary source of revenue with advertising, sponsorship, and commerce filling in the gaps.
This growing reliance on subscription revenue is going to force all publishers to increase their full subscription prices, even if they do continue to offer low 12-month introductory offers tied to a continuous service business model.

What is driving subscription pricing?

Higher prices for both print and web magazines are being accepted by the consumer, and it’s encouraging that consumers are willing to pay more for a digital product that, from the outside, looks much less expensive than print to produce. At Mequoda, we really do believe that higher prices are about more than just correcting decades of underpricing.

Digital magazines, as Hearst’s Loughlin pointed out, offer extra value, including instant delivery, enhanced and extra content, and interactivity, not to mention being easily archivable and searchable without taking up space.

It also appears to be important that digital magazines are green, and don’t take up space in a recycling bin.

Then there’s the data starting to trickle in showing that digital magazine subscribers hit two of marketing’s most desirable demographics: They’re young, and they’re affluent. It’s not often you can get both of those demographics in one product. This two-for means that the target audience for digital subscriptions is more willing to spend money because they have more to spend – and on top of that, they haven’t been trained to think that print magazines are birdcage liners.

How often do you get a win-win situation like that? Plus, numerous publishers have stated that their digital subscribers are renewing at a higher rate than print-only subscribers – and they’re also paying higher prices for their renewal subscriptions. By my count, we’re now up to a win-win-win!

At Mequoda we’re sticking with our belief in the fair value of print and web magazines.

These practices succeed for our niche publishing partners, and they’re content to drive ever-higher revenues for themselves and quietly succeed inside their specific niches.

We’re interested in your experiences. Do you have a carefully thought-out, bulletproof pricing policy? Have you tested an all-access subscription? Or are you still guessing, like the biggest names in the industry? Let us know in the comments below, especially if you have data to share.

Editor’s note: This article was originally published in 2013 and is updated frequently.

Could you also provide the actual circulation numbers for the Top Magazines by Growth in App Circulation?

At last publishers are standing up for the value they invest in their content. We look forward to the improved investment in their creative content providers — journalists will thrive in this multi-platform environment.