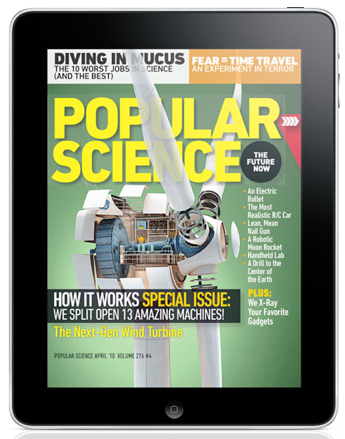 New Media Trends: A new report from AdAge, sums up the first six months of sales data for iPad edition magazines. With statistics showing the average iPad owner is skewed toward males under 35, it’s no big surprise that science, techie and men’s magazines are leading the pack.

Here’s how they stacked up:

#1 Popular Science: One of the first magazines to have an iPad edition, has fared well. Monthly sales averaged 14,000 from April to July, that’s equal to 12% of their total newsstand sales for the same time period.

#2 Wired: Debuted in June with a record 105,000 iPad editions sold (much higher than the print edition for that month), with an average around 30,000 for subsequent issues. This is equivalent to 37% of the newsstand sales.

#3 GQ Magazine: Averaged 13,000 combined iPhone and iPad editions from April through August. Equivalent to 7% of their newsstand sales.

#4 Vanity Fair: Similar to GQ, averaged almost 9,000 per issue from June to September of both iPhone and iPad editions. This is equivilant to just 2% of print issues.

#5 Men’s Health: From April to August sales averaged 3,000, equal to less than 1% of newsstand sales.

This is just the beginning, as more iPads are sold consumer demand will rise and publishers need to be ready. Dozens of magazine publishers are already working on iPad apps, are you?

One thing that would improve the ease and appeal for this new media trend with consumers, is better organization of the iTunes app store.

Have you tried looking for magazine apps? There is no “Magazine” heading under any of the tabs. If you know the title, type it in the search box and scroll all the way down the page to the iPad apps. Until magazines have their own section, there is no way for readers to browse all of the magazine titles currently available quickly. 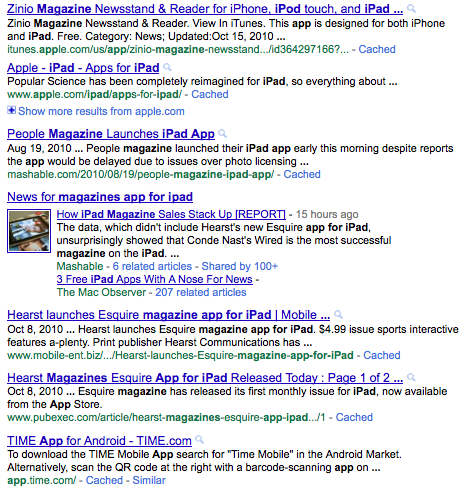 Are you a digital publisher with an iPad app? Please share your comments…