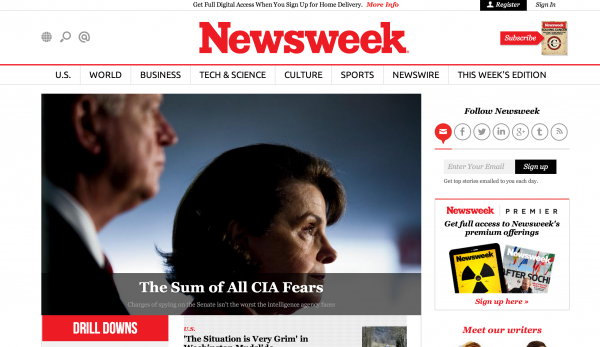 Today we bring you another installment in our ongoing magazine pricing series, What Big Publishers Are Doing Wrong.

OK, it’s not really a series. But lately we’ve been taking up the latest hot stories from the publishing industry, applying a hard Mequoda look at those publications, and finding something utterly different from the breathless coverage that other observers deliver.

Even critical coverage misses the mark, we believe. That’s because industry observers tend to be focused on superficial elements such as the appearance of TIME.com’s redesigned website, or Scientific American’s impressive new 150,000-article archive.

We recently criticized TIME for its failure to offer anything new (or profitable) that would differentiate it from a dozen other news websites; and Scientific American for a muddled pricing strategy that shoots its revenues in the foot.

So today I come to Newsweek, which has the industry in a buzz of excitement about its high-profile decision to relaunch its print magazine. Newsweek, it turns out, is at least separating itself from other news magazines … but not necessarily in a good way. The pricing strategy for its new stable of products – new print magazine, digital magazine and website content with a brand-new paywall – makes Scientific American look like a marketing genius.

The bad and the ugly

We’re sorry to say that there is no good in Newsweek’s pricing.

Let’s start with the dizzying array of prices and options. We’ve rarely seen such a concoction so primed for decision paralysis. 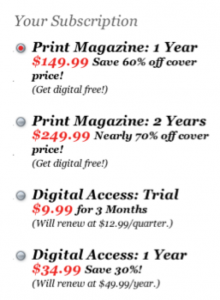 With all due respect Newsweek we have just one word for you: Seriously?!

After staring at this for some time, and finding a note somewhere else on the site that said web access is included in all of these options, I finally managed to translate it into something resembling a price list.

Somewhere, someone thought those digital + web prices would entice more people to try a digital Newsweek subscription, tempted by the lower introductory costs.

But in today’s real world, cable TV providers have spoiled that “introductory price” strategy with their particular version of bait-and-switch, and consumers have become highly suspicious of it.

Besides, there’s absolutely no way a consumer can weight those two options at a glance. Allow me to script this for you:

Step 3: How does that compare to the other option without the trial? OK, it seems pretty straightforward – $35 if I just sign up for a year right now! But no, there’s more … $50 a year after that? Yep.

Step 4: Hm, how much will I spend over two years? [Gets out pencil and paper to start writing all these numbers down] … OK, $49 in the first year, then $52 in the second for option 1, with the trial. So $101 over two years for the trial option.

Of course we all know this potential subscriber never actually got this far, having bailed somewhere around Step 2.

What’s more, if Newsweek thinks kind of confusion will cause potential subscribers to just say, “To heck with it. It’s easier to just pay $150 for the combo package,” they’re very sadly mistaken. Someone at that organization needs to take a course in economic behaviorism from our favorite guru of that discipline, Prof. Daniel Ariely.

Meanwhile, the Mequoda pricing model: In plugging these prices into our model, we first have to assume that every trial subscriber converts (and trust me when I say that they will: Newsweek offers no way to cancel – there’s no customer service phone number, and only a customer service email address to which no one ever responds).

The confusion will be so great, and the high prices so daunting, that we’re assuming a very low response rate to those high-priced offers. Instead, the tablet at the lowest price will pull the highest response, which is presumably not the intent of a company trying to position its new web paywall and shiny new print magazine as the hot premium products.

What to do instead? We want first to declutter the products lineup, including elimination of the trial and the pricey two-year option, and simplifying the packages. The decluttering will give us a 10% lift in overall response.

Magic! You generate more orders overall, and sell a higher percentage of combo orders at the same time. Newsweek totals over $10,000 more by using this pricing strategy.

Now let’s employ the decoy pricing strategy that we consider a best practice. In fact, this is a really fun thing. We can give subscribers another shot at the print product at a lower price point by bundling it with the web for $40, and lower the price of the combo to generate another $1,000+!

This time you get another 20% lift in response from the existing price structure, and the decoy pricing, by driving 40% of your subscribers to the combo instead of 1% or 10%, as we expected in the first two models with the $100+ price point, actually increases profits further.

Lowering the combo price, while a temptation for a company trying to convince subscribers that the print magazine is truly a “premium” product, gives consumers too much of a leap from the decoy price to the highest price. Human nature won’t let most people say to themselves, “Oh, it’s just another $100, I might as well go with the whole combo.” They will, however, allow themselves to pay an extra $5, enough to make up for the drop in the top price; that’s the beauty of decoy pricing.

While I’ve believed for some time that print will one day truly become a luxury, premium product, I don’t think the market is there yet. We’re just now training consumers to pay $45-50 for a print subscription, after years of allowing them to pay $10-20. We have yet to train them to accept $100 as a price point.

If Newsweek were consulting with us, we’d certainly encourage them to test our models against their existing pricing. But we fear this is a disaster in the making, and just when they’re taking a huge risk by relaunching a dead print edition. Making it even worse, the company says it’s going to rely largely on subscriptions for revenues – 80-90%. We’re almost afraid to look.

What do you think? Is a print magazine worth $100 in the marketplace? How long do you think print Newsweek will last this time around?

Thank you Mark. You are correct we didn’t model cost. Yes, there are costs of fulfilling the print product. But, is the market ready to pay $!00 more for that luxury. I suspect not. We are not interested in maximizing profit on print, we’re interested in maximizing profit for the magazine as a whole. We’ve modeled this conservatively here but in our experience an approach like this will generate more orders at the $55 price AND generate more orders — and will be the winner. As David Ball notes however, we’re going to test this.

This is a helpful analysis, and the decoy pricing concept is definitely worth putting into the toolbox. But I think you overlooked an important factor: cost. If Newsweek followed a pricing scheme that resulted in more print orders, as you suggest, its costs would increase substantially. With a one-year Print+Web price of $49.97, most of the revenue would go to covering the printing, paper, and especially postage costs of sending 50 or so issues to subscribers. A new digital subscriber costs almost nothing. The goal should not be to maximize revenue but rather profit, which you can’t do without considering cost.

But maybe I missed something.

Complicated pricing schemes, such as Newsweek is using, tend to be the result of publishers and marketers and financial people spending too much time talking among themselves and not stepping back and looking at what is happening in the marketplace, and what the user experience is. Newsweek clearly needs to simplify.

The contrast pricing, or decoy pricing, has been a pretty consistent winner in recent years for multi platform publishers so we bias in that direction, but to be clear, we believe in testing, which should be relatively easy on a properly designed site.

Thanks for the interesting analysis. Seems like you add a fair amount of risk into the equation for an additional $1,500 but it is certainly worth testing once the simplified pricing strategy is established as the control.