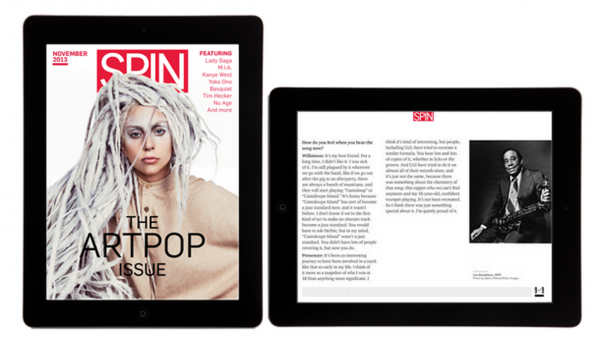 For those of us who spent our teen years in the 90s, SPIN was somewhat of a magazine staple for anyone even remotely interested in music and pop culture.

In recent years it’s been kind of a rollercoaster for the SPIN brand, though. They were sold for less than $5M in 2006, relaunched in a bigger format in 2012 and then sold again to Buzzmedia, who took them out of print the same year.

If like me, you have a nostalgic pang for SPIN, you’ll be glad to know they’re alive and well and launched a digital magazine.

D.B Hebbard from Talking New Media writes, “The soap opera that is SPIN magazine continues as the magazine property that was first launched by Penthouse founder Bob Guccione Jr. in 1985 has released a new iPad edition into the Apple Newsstand. The new app, SPIN Magazine, uses the Mag+ platform to create a native tablet magazine.”

As of right now all issues available in the SPIN iPad app are free.

To read more about this story visit Talking New Media.