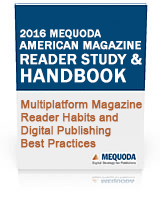 This year, like we have for the last several years, we ran a study to find out how the average American adult magazine reader is consuming and creating new habits with digital magazines. We polled 3,241 U.S. adults with internet access.

This study is unlike what you might see from media associations or other industry media who may limit their survey data to their membership. This is a bottom-up consumer survey. So when we ask them, the 3,000 plus consumers about their magazine readership, this would include a magazine like Metro Parent, which is distributed for free in racks in southern Michigan, as well as a trade magazine that they may get at their company.

So when you think about magazines, this is not a consumer magazine study: It’s a magazine consumption study of all B2B, B2C, free, and paid. If the consumer thinks it’s a magazine, then they will have answered accordingly here, right? So we’re letting them tell us what a magazine is. Which is a little scary in some cases, but ultimately they’re in charge.

What we learned from the 2016 Mequoda American Magazine Reader Study & Handbook was a mix of surprising and re-affirming. Read some of the results, download the report for yourself, and let us know your thoughts in the comments below:

2. To be precise, the number of U.S. adults reading digital magazines has increased 13.8% from 2015, with nearly 42% of US adults reporting having read one or more digital magazine issues in the last 30 days.

4. Nearly 60% of multiplatform magazine consumers say their digital edition is most important to them.

7. Multiplatform magazine consumers are 1.67 times more likely to spend $100 per year on digital magazines than digital only consumers and have increased their digital spending by 52.7% year over year.

So, remember the myth that we were telling ourselves, our boards of directors, and our investors for 10 years? That’s being debunked in front of you.

The myth was that you couldn’t make money with digital magazines. Consumers wouldn’t pay for them.

All it takes is one good digital magazine to get readers into digital consumption. As soon as they find one magazine that they really like that they can access digitally, they break through and start to shift buying all their products that way. We said people would never buy music digitally, then iTunes revolutionized and simplified buying music digitally. We said people would never buy a movie digitally, but now people are buying movies on their TVs and through Amazon every day.

Publishers almost shot themselves in the foot as an industry by putting cheap replicas into the digital product stream that they wanted them to prefer. It’s possibly the second worst thing done as an industry, besides putting all their content on websites for free. They could have eradicated the entire magazine industry if that persisted.

But are we generating way more revenue now from the average digital magazine reader in digital content because the consumer’s willing to buy it, or because publisher’s finally started to charge for it? Please download the study, and let me know your thoughts in the comments.

Just wondered if a question was asked re: how much time was spent reading a digital magazines vs. a print version.

Hi Jack, we didn’t ask that question this year, but we may add it next year!