The New York Times continues to lead the transformation of the subscription publishing industry. In the next few months, they’re rolling out a brigade of new multiplatform publishing products that are focused on producing higher profit margins, rather than solely focusing on revenue. As the leader of the pack, they generate the largest percentage of their revenue (56%) from their readers. 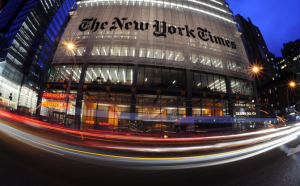 In the past three years, using the metered version of a paywall, they have transitioned all print subscribers into an all-access model; they’ve generated 727,000 new digital-only subscribers, and they’re bringing in $150 million from those new digital readers every year.

Now that they’ve hit a plateau, they’re gearing up for some major adjustments, and we know that the 41% of the newspaper industry will follow suit. These are the best practices that we align with their future adjustments.

Use bundles to sell print and digital editions

As you might have read in our previous case studies, when customers are given bundled options at the right price points, they choose the highest price point that includes print and digital access. You might think that digital access only appeals to the younger audience, but the average age of a digital subscriber for The New York Times is 47.

The Times has been successful at linking print and digital accounts, 90% in fact, which means that they now have email addresses for all of their long-time print subscribers. They can now use this growing list to sell their future products.

It worked for the Financial Times, and it can work for The New York Times. All the Financial Times needed to do was offer a letter from the editor, extra content and e-paper access and they landed 33% with premium accounts. Taking note, The New York Times is introducing a new premium content tier for their current subscribers, too. Nieman Labs speculates that conferences and TimesTalks will be part of this, along with pairing their ebook singles business. They’re suggesting they might even try something like the Chicago Tribune is doing with Trib Nation, which lets readers take control of their content and sometimes even participate in it.

The contrast effect is “the change in perception when different stimuli are put side to side to interact with one another. For example, a weight is perceived as lighter than normal when compared with a heavier weight.” When our client, the Biblical Archaeology Society, put up an offer online with three different price points, 55% choose the highest price point. Second in line is 25% for the middle price point, and only 20% choose the lowest price. The actual price points are another story, explained here.

In 2014, The Times will be working on improving content. For example, in their Food & Dining section, they’re getting much more into videos and how-to content. Most notably, NYTLabs is working on a device called Julia that uses this content. The device works based on voice and gestures so that someone cooking a recipe doesn’t have to touch the screen.  The project is explained as a way to use the New York Times recipe database as much as possible, “interpreting ingredients and tools, extracting verbs from steps, and tying photography and video into the experience.” They also wanted to create a new kind of feedback look between themselves and the users so they can create better content.

The Times has basically created a product exclusively for their Food & Dining enthusiasts, which they’ll be able to sell to them in the future, through that section. Niche publishers apply this in more budget-friendly ways by creating new books and downloads for each section or topic in their publication. Research shows that ebooks are the number one form of digitally downloaded content.

Use aggregation to dominate an information niche

What’s better than being a source of good reliable information? Being a portal for lots of good, reliable information. The Times’ new Need to Know product will be an aggregated portal meant for smartphone users to digest the news, curated by Cliff Levy.

Jay Annis, VP of The Taunton Press, was recently quoted as saying, “We can’t afford to pay for content if it’s going to be a one-time use,” which is something being echoed across the publishing industry.

The Times says that their main priority with Paywall 2.0 is generating more profits, although they don’t say much more than admitting that Times Select was too complicated for users. In our world, we know that generating more profits (as opposed to just revenue) means recycling some content, or repurposing it in other ways rather than using it once and never using it again. Will the herd of the subscription publishing industry follow once again? We hope so.

The New York Times is always worth watching. Their diligence and creativity bodes well for their future, and most importantly for Mequoda Daily readers, it’s a great laboratory we can all observe and learn from.