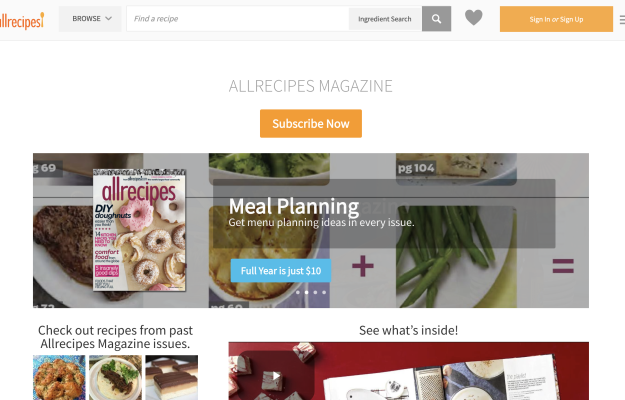 Even though print magazine launches are down, AllRecipes.com has stepped up to the plate and decided to come out with one of their own. AllRecipes.com is a leading recipe website, usually showing up on the front page for just about any recipe you could possibly search on the web. Their online tools and virtual recipe books have made them a go-to portal for the online chef.

AdAge reports that it’s a new vehicle for their advertisers: “The magazine will guarantee its advertisers an average paid circulation of 500,000 and publish six times a year, starting with a December issue planned to hit newsstands in mid-November.”

They’re not just winging it though, Meredith has been quietly testing the audience for months to determine whether it’s a profitable avenue to go down. The 400,000 paid orders that came out of their promotions (bundled with Better Homes and Gardens, Parents, Family Circle and Fitness) show that they’re off to a pretty darn good start.

Who else is wondering how savvy and dynamic their digital magazine will be?

Frommer Gets Back to Work

In more good news for print, New York Times is reporting that Arthur Frommer will start publishing again now that he’s bought his company back from Google. He hasn’t had “direct” control over his guides since 1977 when he sold them to Simon and Schuster. According to the Times, the guides will capitalize on the user-generated content trend, saying that “most of the newly issued Frommer’s guides will be written by freelancers who live in the cities they are reviewing.”

Say what? A newspaper making a digital magazine? Well, the word is in, and Jill Abramson, executive editor of the The New York Times says the rumors are true.

In a letter to her colleagues, Abramson writes, “At a time when mobile traffic is nearing half our visits, we are reaching a much broader array of readers,” and that they will “create an immersive digital magazine experience, a lean back read that will include new, multimedia narratives in the tradition of ‘Snow Fall’ and last weekend’s compelling account of the Arizona fire, as well as some of the best reads published during the previous week.”

This all goes under the supervision of Sam Sifton who has been promoted to Senior Editor and will lead the “Need to Know” or “N2K” project. For more details about the immense number of changeup in job roles due to this new venture, check out the full letter on Mashable.

Publishers have given away free issues since the dawn of print publishing, and Time Inc. has decided they’re going to let that philosophy and business strategy brand into digital magazines.

According to AllThingsD, “Time Inc. officials said they’re only able to pull this off because they’ve been working with Adobe on a back-end system that allows them to easily change up their free offerings on the fly. They’ll implement the new software for all 21 of their titles on sale at Apple’s iTunes Newsstand by the end of the year.” Time Inc.’s goal with this strategy is to “build up the publisher’s roster of digital-only subscribers.”

Because there obviously aren’t enough cat videos on the web, the founder of Huffington Post, Ken Lehrer is launching The Dodo, a site dedicated to stories about animals and pets.

“Our thinking is that the topic of animals, animal rights and the relationship between animal and people is an issue that’s on the cusp of exploding. Look at the front of The New York Times — they have a significant animal story on the front page every week. It’s our plan to launch a site to try to own that topic,” says Lehrer.

In a twist of hilarity, The Fluffington Post already exists.