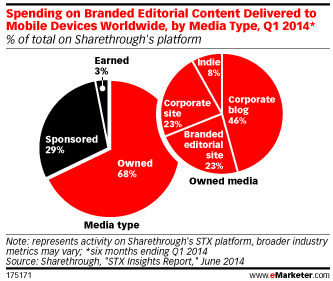 Data released this month by Sharethrough shows that 29% of spending on mobile is for sponsored editorial content on professional publisher sites via native, in-feed ads, and engagement is up to 2.2%, eMarketer reports.

These are both encouraging signs for branded editorial.

“In August 2013, Sharethrough found that nearly all U.S. digital advertising professionals thought that native mobile ads overall were very or somewhat effective for branding campaigns, and the channel is likely to see increased spending in the coming years,” eMarketer writes.

“According to data released in September 2013 by Interactive Advertising Bureau and Ovum, 74% of U.S. mobile marketers said mobile native advertising was an important or very important mobile ad development.”