Why I’ve added storytelling to journalism, blogging and consulting 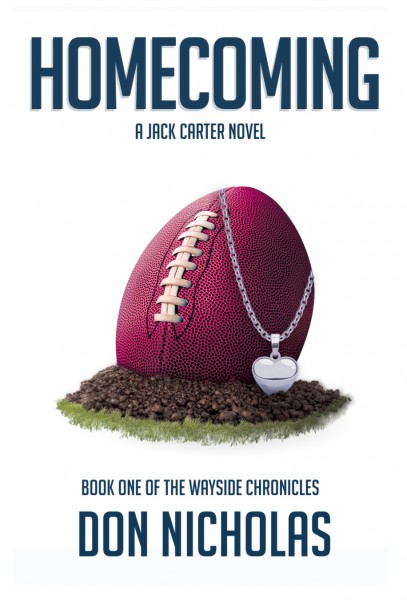 Mequoda Gold Members and every reader of this blog know me as a publishing consultant, journalist and blogger. Now I’m thrilled to introduce to you: Don Nicholas, novelist.

No, it’s not a mid-life crisis, and I haven’t been stolen by aliens. It’s actually a return to my earliest love (sorry, Gail), and the realization of a lifelong dream.

Here’s how it all happened.

I decided to be a writer when I was in sixth grade. I had moved into a brand-new school mid-semester, and as any 12-year-old would, I felt out of place and uncomfortable with my new surroundings.

As it happened, the class had just begun a journaling project. We were to write about anything we wanted to. I decided to write a short story, one that would reflect how I was feeling at the time.

This story was about an alien (that would be me, the alien in the new school) who becomes stranded on Earth. With my vivid 12-year-old imagination, I created an alien who eats … steel! As you can guess, this creates a slight problem, especially when he pulls up some railroad tracks for dinner and causes a deadly train crash. My poor alien becomes a hated and hunted being, something I probably strongly related to at the time.

At the end of the week, after working on my story every day, I handed in my journal to the teacher, Mrs. Blake, along with the rest of the class. On Monday, our journals were returned to us, having been read over the weekend.

My journal bore a handwritten note from Mrs. Blake.

“If this is original, it’s really, really good.”

I had always believed I could write well … and now, I thought, Wow, I’m really good at this! I want to be a writer! I want to say to people when they ask what I do, “I’m a writer!”

After that, I started taking my English classes more seriously. I signed up for the school journalism program in the summer after 7th grade. I even worked as a producer for the school radio station.

Later, while serving as a nuclear engineer aboard the USS Enterprise, I also volunteered as a writer/producer for the Armed Forces Network. I loved telling stories, and never forgot my 12-year-old self and that short story.

I firmly believed I could be a novelist, or maybe even a Hollywood scriptwriter. I could tell the world plenty of stories! Yet all this time, my practical side kept whispering in my ear that I’d never be able to actually make a living that way …

In the end, I decided that journalism was the sort of writing career I would also enjoy, and also one that would deliver a regular paycheck. I could always write novels when I retired, I told myself.

So after leaving the Navy, I earned my journalism degree and went on to work for Sacramento Magazine and Houston Home & Garden. Over the course of 30 years, I’ve stuck with magazines, having founded several firms in the magazine publishing industry. In my spare time, I’ve always indulged my inner novelist by devouring mysteries, thrillers and historical novels.

Of course I also love my day job, don’t get me wrong.

But one summer day in 2011, the idyllic (really!) suburban town I live in woke up to news of a horrific crime: An 18-year-old high school sports star, fresh from high school graduation, had brutally murdered a female classmate. And my imagination was sparked once again, just as it had been in 6th grade. This wasn’t the usual adult crime of passion, with its overtones of anger, control issues and frustrated power. I wondered: How had a boy become, in a mere 18 years, a person who could commit such a crime?

Amid my interest in the subject matter, I suddenly realized that I didn’t have to write my stories full time. I could treat it as a hobby, and not wait for retirement. Thus was born my first novel, Homecoming – the story of a retired Navy admiral, Jack Carter, returning to his hometown, Wayside, Massachusetts, as its new chief of police, where, of course, he must solve a murder very similar to the one that had actually occurred.

Of course, being the dramatist that I have been since inventing that alien many years ago, there are actually two murders in the first two chapters, before Jack even gets off the plane in Boston. And in Chapter 3, Jack meets and makes a date with a flight attendant for the next night, adding a third romantic interest to the two he already has.

Meanwhile, he goes straight from Logan Airport to a meeting of the Board of Selectmen, which has just witnessed a final, heated citizens’ debate over a large development project in the center of town – one that has the potential for criminal mischief from both opponents and proponents.

Today I’m thrilled to be able to finally call myself a novelist. And yes, I’m already working on the sequel every weekend, because I love doing it and because Mequoda copywriter Mary Van Doren nags me incessantly to hurry up so she can find out what happens next to Jack and his three romantic interests.

And so, with the above introduction as a teaser – I am a master marketer, after all – I will now simply add that Homecoming is available in print and digital editions at Amazon.com. Because after all, the only thing a novelist likes better than finishing a novel is … having someone read it! So I invite you to go ahead … make my day!

Congratulations, Don–what an accomplishment to finally achieve that lifelong dream! Hearty kudos to you and I look forward to reading it.