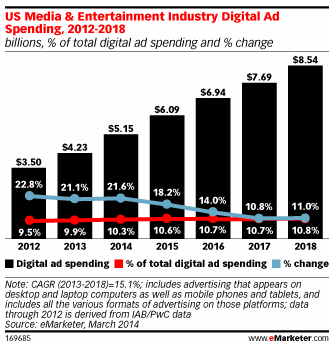 Digital advertising spending is set to increase faster in the media and entertainment industries than in any others, according to eMarketer’s “The US Media and Entertainment Industries 2014: Digital Ad Spending Forecast and Trends.”

“Virtually every advertiser has a dual need to build their brand and also drive lower-funnel actions,” Yahoo’s Mark Ellis told eMarketer. “Some super high-end branded advertisers will never sell anything online, and some direct marketers are only interested in driving acquisitions. So everybody is playing on both sides.”

To read more about the increase in media ad spending, visit eMarketer.