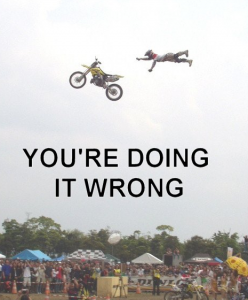 Many publishers just launch into running their own promotions and sweepstakes through Facebook, but a good percentage of them don’t even realize that there are certain rules you must adhere to according to the big ‘ol Facebook rulebook.

For example, did you know that it’s against Facebook’s policies to ask people to “like” you in order to join a contest? That’s right, the most popular contest trick isn’t even legit. Even the big brands are breaking the rules.

According to Strutta, there are two big updates to Facebook’s policies in terms of promotions, and the first one you probably didn’t even know about to begin with:

This is all good news. How many of you sought approval from Facebook before running your promotions anyway? Strutta also notes that “any promotion administered on Facebook must be done through an application, and that application must comply with Facebook’s platform policies.”

However, almost every Facebook promotion I’ve ever seen breaks Facebook’s rules when they have a promotion. So let’s stay on their good side now, and figure out the loopholes. In plain English, Facebook breaks down their rules:

The more you know… right? So start over and start thinking of more creative ways to get Facebook followers!

Thanks Amanda. I had an interesting chat with Wildfire myself. Any other companies like Wildfire that you think are worth checking out?

Third party apps are pretty expensive. I recently talked to the folks at WildFire Apps, who have the “in” with Facebook and their contests run anywhere from $300 to thousands of dollars. I’ll let you know if I stumble on any less expensive ones though! I’m sure it’s only a matter of time before someone creates a free one and drives down the prices of paid applications.

Third party apps are pretty expensive. I recently talked to the folks at WildFire Apps, who have the “in” with Facebook and their contest run anywhere from $300 to thousands of dollars. I’ll let you know if I stumble on any less expensive ones though! I’m sure it’s only a matter of time before someone creates a free one and drives down the prices of paid applications.

Amanda, you were reading my mind. I was just reviewing the official Facebook rules to see what you can and can’t do.

I thought you could have someone enter by liking a page, i.e. this rule – “You may require that an entrant like a Page, check in to a Place, or connect to your Platform integration before providing their full entry information for a promotion. You will not condition entry to the promotion upon taking any other action on Facebook, for example, liking a status update or photo, commenting on a Wall, or uploading a photo.”

Also, do you know of any free or inexpensive third party apps to run a photo contest via Facebook?