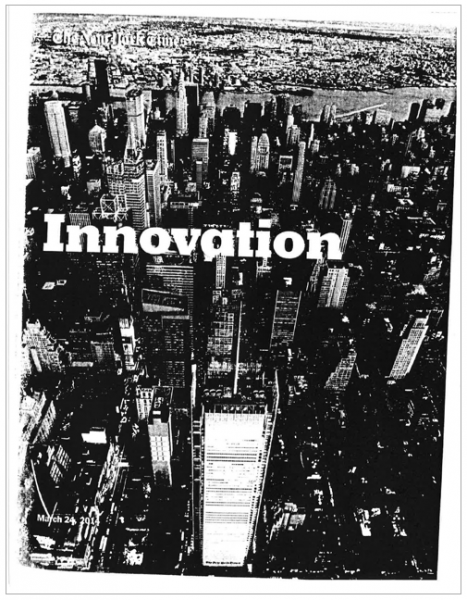 via the Nieman Journalism Lab

All the news that’s fit to print was fit to be tied last week, as the controversial ouster of Executive Editor Jill Abramson was quickly followed by the leak of The New York Times‘ Innovation Report.

The 90-plus-page document is substantive, to say the least. It’s the product of a six-month study on the part of a handpicked team tasked with navigating the Times‘ digital future and providing suggested best practices to build upon its success. It also scrutinizes the paper’s current multiplatform approach, finding some complacency and significant managerial resistance to change.

The Innovation Report was leaked to BuzzFeed, and the Nieman Journalism Lab quickly released a fascinating breakdown of its contents. Yes, we’re clearly biased, but it’s affirming to see so many echoes of the Mequoda Method in the Times committee’s recommendations, particularly when it comes to repurposed content, structured data, and an emphasis on live events.

One takeaway from the Nieman Journalism Lab’s analysis is that the Times – as legacy a publisher as they come – already has a commanding digital presence simply because of its peerless output and trusted brand, but also has tremendous room for improvement.

As daunting and demoralizing as it might be for Times management and staff, this is wonderful news for the industry. Like many large publishers, the Old Gray Lady is lacking a strong digital strategy, according to its own task force, and that’s yet more validation for smaller magazines – many of whom are Mequoda Members – that have their content planning and social media down to a science.

More evidence that it should be legacy publishers following niche publishers, and not the other way around:

“According to the report, there is a sense at the Times that Reader Experience staffers and newsroom staffers are not supposed to communicate. Says David Leonhardt of the process of developing ‘The Upshot,’ in which he had unanswered questions about competition, audience, platform strategies, promotion, and user-testing, ‘I had no idea who to reach out to and it never would have occurred to me to do it.'”