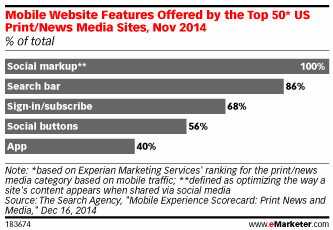 eMarketer has released the findings from two recent studies that address global tablet use in the coming years, in addition to problem areas that mobile publishers can improve on as they try to capitalize.

Tablet use will top 1 billion in 2015 – accounting for 15% of the world’s population – with a forecast of 1.43 billion by 2018. But while the past three years have seen a doubling of tablet users, growth will slow in the next three, eMarketer reports.

2015 will show 17.1% growth, down from year-over-year increases of 29.1% in 2014 and 54.1% in 2013. Still, it’s growth, and the market will continue to expand at least through 2018, according to eMarketer’s “conservative” projections. It bases that cautious outlook on three factors: 1) The perception that tablets are luxury items; 2) An influx of competition from other devices, like smartphones, phablets, and wearable tech; and 3) Confusion over use case for tablets, as opposed to other devices.

Fun fact: eMarketer pegs the following countries as the top 10 overall in tablet usage during the next three years (annual rankings vary):

Mequoda Members know that tablets are just one component of a multiplatform publishing approach. As digital magazines and other brands continue to tailor their content and pricing models for mobile consumption, accessibility, quality, and a strong grasp of niche audience will determine whether they will thrive.

Another study recently released by eMarketer, based on data from The Search Agency and Experian Marketing Services, shows that the top 50 “print and news media websites” have some room for improvement when it comes to those criteria.

While publishers are doing a nice job of dedicating mobile sites to their content, there is a lack of speed: None of the top 50 are meeting Google‘s recommended five-second load time, eMarketer reports.

“In fact, average load times for each format weren’t even close to this threshold: 67.4 seconds for dedicated mobile, 99.8 seconds for RWD, 110.3 seconds for dynamic mobile and (less surprisingly) 162.0 seconds for desktop,” according to eMarketer. “Formatted properly for mobile or not, long load times lead to a poor user experience.”

“Magazines have seen success on social, and social platforms are good for print news and media sites as a whole since they allow for distribution and sharing of content.

It makes sense, then, that all of the mobile websites studied featured social markup – that is, a way to optimize how a site’s content appears when it is shared on social media. But in contrast to this, just 56% of sites featured social sharing buttons on their homepage. This feature allows mobile users to post content in just a few taps, making it even easier for readers to share on social.

Across industries, companies who haven’t optimized their websites for mobile have likely been left in the dust. In Q3 2014, CMO Council and SAS found that three-quarters of marketers worldwide used mobile-optimized sites – the most-used mobile marketing tactic out of those studied. A further 15% had woken up to the trend and planned to optimize their sites for mobile within the next 24 months.”

The message we’re getting from these studies is twofold: Continue to customize your content according to platform, and make sure it performs at a rate as high as whatever technology it’s being read on.

What about your thoughts on the tablet market and mobile publishers? Let us know in the comments!