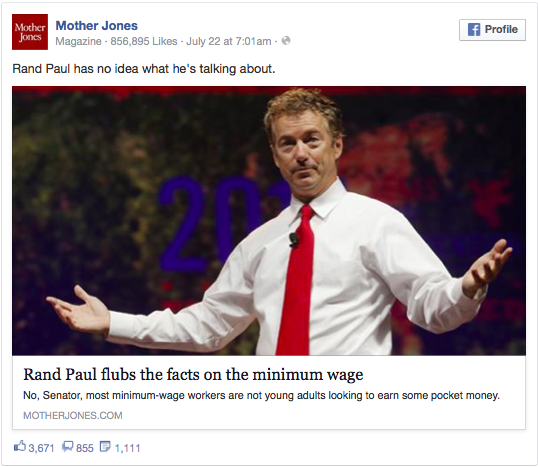 While John R. MacArthur of Harper’s is steadfast in his refusal to surrender to the web, fellow progressive liberal publisher Steve Katz has Mother Jones riding a wave generated largely by Facebook referral traffic.

The Nieman Journalism Lab reports that Mother Jones broke its one-day record in June with 3.1 million visitors, which in turn has driven up the magazine’s monthly baseline traffic. Katz and Engagement Editor Ben Dreyfuss attribute the success to “doubling down” on Facebook, whose recent algorithmic changes have favored Mother Jones‘s content-rich posts.

“You gain more eyes with all this stuff that people want to read because it’s candy, and then, once you gain their readership and their following, you can give them the more healthy thing,” Dreyfuss tells the Nieman Lab.

“Our most shared stuff is never the candy stuff, it’s not the dessert. It actually ends up being some of the magazine stories, some of the things we’re really proud of, as opposed to being silly things.”

To read more about the growing popularity of the Mother Jones website via Facebook, visit the Nieman Journalism Lab.