When newspaper publishers close their doors, have they truly considered their ever-growing digital options? 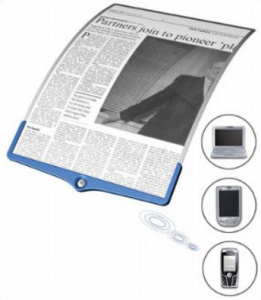 It’s all doom and gloom in the newspaper industry right now, from the news that four Michigan markets will lose their newspapers, to the bill being introduced that asks newspapers be declared non-profit.

“We are losing our newspaper industry,” said Sen. Benjamin Cardin, in reference to the bill. “The economy has caused an immediate problem, but the business model for newspapers, based on circulation and advertising revenue, is broken, and that is a real tragedy for communities across the nation and for our democracy.” [source: AP]

That’s all well and good, but instead of going the “Print or Die” route, they might take notice of speculators who note that printing the NYT costs twice as much as sending every subscriber A free Kindle.

We had the same thoughts when the Amazon Kindle first came out:

At $399, Amazon’s Kindle is a bit pricey for all but the most avid early adopters. But if the newspaper publishers themselves bought the devices, and gifted them to subscribers, they would save a fortune on the materials, manufacture and delivery of the traditional, physical newspaper product. An Amazon Kindle in the hands of every newspaper subscriber would pay for itself in short order.

The publishers that control the medium — in this case, the wireless delivery system and reading device — will survive the media wars.

Previously, pundits would say that freedom of the press belongs to those who can afford a press. In the future, at least some of the power of the First Amendment will reside with publishers who can control the pipeline, or wireless reading device network.

Let’s discuss for a moment on this. First of all, the NYT isn’t going out of business any time soon, and they’re the ones who would be able to afford sending a Kindle in exchange for a digital subscription.

Can smaller newspaper publishers afford to offer this trade-off within their print model? Possibly, it’s up to them to discuss, survey their audience and decide on a solution. The complication still lies with ad sales, brand recognition, and those people who still want to carry a newspaper under their arm.

Why it’s OK to go digital when print fails

Instead, when times get tough (and they’re only getting tougher), newspapers might consider going digital only, like Seattle Daily. I’m increasingly surprised at how many print publications choose to close rather than make the switch to an online business unit.

Once a newspaper has converted, can’t they still take advantage of digital readers and online subscriptions? Call it “going green” if you’d like, but don’t give up. Digital is increasingly becoming the platform of choice.

According to a recent Time article, “Martin Nisenholtz, who oversees the far-flung digital operations of the New York Times, said the Kindle has been a “surprisingly successful” platform for his newspaper.” This is an addition to the popular (and free) NYT iPhone app.

In other words, people are still willing to pay for content; they just want it on the platform they prefer.

Will some still opt for the free information they can get via the iPhone app? Sure, but they’re the same people who wouldn’t have bought a newspaper to begin with.

The Sony what? Oh right, the Sony Reader came out way before the Kindle.

It’s possible that the Sony Reader is about to make a grand re-entrance now that they’ve struck a deal with Google Books. The deal actually has nothing to do with newspapers though.

Instead, it offers those with the device, access to 500,000 books that were written before 1923. In other words, their collection of books that are already open to the public domain.

Nonetheless, it’s enough to perk up the ears of a few avid readers, but Amazon Kindle is the device newspaper publishers should focus on.

As for the Apple iPhone, are you aware that the Amazon Kindle iPhone app is free? This means that you don’t even need to have a Kindle in order to view and subscribe to their content. This is in addition to a handful of other e-reader apps that newspapers might partner with.

Those newspaper publishers thinking that many readers won’t dish out $359 for a Kindle might consider the 17 million iPhone owners when making their assessment.

What do you think? Should newspaper publishers consider their digital options?

The reason most of the newspapers are going out of business is thier editorial page and not the news content. Conservative papers are doing quite nicely thank you. The other problem is that newspaper began giving away their content on the internet with no real plan to cover the cost. Sort of like a woman giving it away and then trying to figure out why she has no long term relationship.

People who make their living by promoting digital publishing understandably think it’s a matter of simply substituting some electronic device — a PC, an iPhone, a Kindle — for ink and paper.

But that’s not the problem faced by newspaper publishers.

For the most part, newspaper companies are struggling with three major issues:
1. Loss of advertising. A part of newspapers’ traditional revenue stream — classified, retail and auto — has moved to the web. But drops of 30% and more in 2008 are not the result of a shift to the web. Those drops are a result of a stinko economy.

2. A poor circulation sales operation. I suspect newspapers would see circulation grow if they went back to the “little merchant” carrier system. It shouldn’t surprise anyone that circulation is down when publishers rely upon telephone sales centers, and adults whom you never see to deliver the paper.

3. Excessive debt. Almost all the newspaper companies that you hear described as financially troubled are done in by excessive debt, usually a result of M&A financing.

Newspapers that aren’t encumbered by excessive debt are, for the most part, still profitable. Yes, the profits are smaller than they used to be, but a profit is a profit.

McClatchy’s long term debt — most acquired in buying many of the former Knight-Ridder newspapers, such as the Miami Herald and Philadelphia Inquirer — was 120% of revenue. Interest expense was 10.4% of net revenue — and 96.9% of operating profit.

But having said that, you have made an important suggestion, and one that newspaper publishers should seriously consider.

Just wanted to share some information that I came across in a few articles discussing about recession and how we can adopt a different marketing strategy to promote our business. It’s quite eminent that most of the advertisers and businesses are taking to online advertising medium since the Internet has now become a necessity to reach global audience. However, even today there is still a huge chunk of people who do not access Internet and to reach this segment of the society; we can rely on the print media. This in fact would be a great choice for anyone whether they are looking out for global, national or local exposure.

Since the economies are now at the bring of recession, it’s a good idea to consider print media as well in the marketing mix so that you can extend your reach further to get additional traffic to your website or business. You can try a blend of online and print advertising through a reputed ad agency that can help you professionally.

Let traditional newspapers go the way of the dinosaurs… we need to WAKE UP and stop depleting our valuable resources and polluting our environment. We need to embrace new technology for the survival of life on planet earth.

@ Joe – Good observation. I think most of print media went into it that way though. Depending on who actually then developed a serious online business model is the difference between who still has their head above water right now, and who doesn’t.

@ Joel – I agree with you 100%, like I said, it’s easy to say the NYT could give out a Kindle, but smaller newspapers can’t afford to do so. My bigger question is… why close up shop? It takes significantly less resources to stay on the web. People like their local news. For example, if I live in “Tiny Town”, MA, I don’t want to read the Boston Herald, it’s not entirely relevant to me. Now if only newspapers can convince local businesses to stop advertising on Yelp.com and start advertising on news sites again!

Sending out an electronic reader would be feasible and would result in huge savings — if all readers would accept it. The issue is that at least half and probably more of readers would prefer their print version. Therefore, you don’t significantly reduce the cost of printing and distributing the newspaper. If you have to print 50,000, you might as will print 70,000. If you have to deliver 50,000, you might as well…. In some markets the electronic reader may work, but only for those papers that are willing to cut off the paper and ink readers who won’t go along with it — that’s a tough choice for a publisher to make.

The real issue is the disappearance of advertising — not that readers and ads have all moved to the web. Where there were five supermarkets, now there are two. Where there were five department stores in the So. Cal market, now there is one (that regularly advertises). Ads started disappearing from newspapers long before the web; it has simply exacerbated the situation.

Newspapers will soon stop giving away their content on the Web. They have to. We’ll be buying reader cards that allow us access to multiple newspapers online. Free Web newspapers supported by advertising is not a viable model on any large scale.