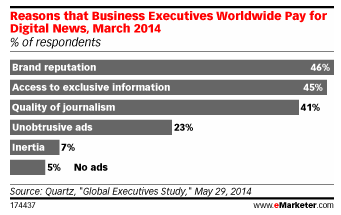 Almost 40% of business executives worldwide pay for digital news, and nearly half of them make their choices based on brand reputation, according to a study conducted by Quartz.

eMarketer relays that the Quartz data shows finance executives being the most likely to pay for digital news, followed by consulting execs, media and advertising execs, and tech execs.

While 46% said brand reputation was their primary criterion in choosing a news source, exclusive content, caliber of journalism, unobtrusive ads, and “inertia” followed.

The Quartz study reveals that more than 75% of respondents spend 30-plus minutes reading digital news daily, and that an more than a third spend upward of an hour.

eMarketer estimates that “the average time U.S. adults spend per day reading hard copy newspapers will drop 22.2% this year, from 18 minutes in 2013 to 14 minutes, while digital will grab 5 hours 46 minutes of daily media time. As digital becomes the new normal, it’s likely that it is grabbing some of that physical newspaper time, which could fuel future growth in digital news purchases.”