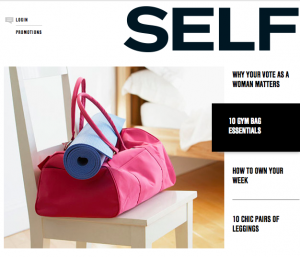 In case you don’t remember, Self magazine, a major publication from Conde Nast, started to revamp itself earlier this year. This process began as Joyce Chang was brought on was the company’s new editor in chief. Chang was formerly the executive editor of Cosmopolitan.

Now, changes continue to take place at Self, as two new significant positions have been filled. Liz Baker Plosser is the new fitness director at Self, coming over from Cosmopolitan. Plosser was in charge of health and fitness content at Cosmo and CosmoBody, which is a digital subscription service. This acquisition seems to fit Self just right.

The other position filled was lifestyle editor. Tatianna Boncompagni was selected for the position. Past roles for Boncompagni included being a regular contributor to The New York Times and The Financial Times. She also worked for American Lawyer and The Wall Street Journal Europe.

Read more about these new acquisitions by visiting Ad Week.