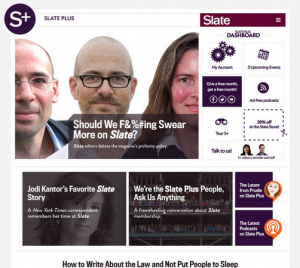 Slate is launching a new membership tomorrow and they ask that you please not call it a paywall. OK maybe they didn’t ask, but they don’t want us to report it as one.

“A membership — costing $5 a month or $50 a year — will allow special access to Slate’s writers and live events,” reports Leslie Kaufman of The New York Times.  “Mr. [David] Plotz [Slate’s editor in chief] said that this did not equate to a paywall and that all content on Slate’s website would still be free. In its infancy, in 1998, Slate erected a paywall and signed up 20,000 subscribers, but the experiment ultimately failed.”

So what’s in this membership again?

“A Slate Plus membership will give readers special access to the site’s editors and writers, as well as members-only discussions with Emily Yoffe, Slate’s Dear Prudence advice columnist. Members will also be invited to give advice on which politicians or entertainers they would like to see profiled.

In addition, they will be able to listen to the site’s podcasts, including Culture Gabfest and Political Gabfest, free of advertisements. They will also gain access to additional audio segments and reserved seating at Slate events at discounted prices.”

This isn’t actually the first time a magazine has concocted this uber-loyal reader membership. Several fashion magazine have popped up with similar memberships that offer subscribers access to private events, samples of beauty products and other VIP treatments. “We also think it’s important to give readers a stake in the journalism they value, which is why we’re asking them to pay for membership,” says Plotz.