In the wake of Penguin 2.0, smart publishers are simply doing what they’ve been doing

It was just a couple weeks ago that Matt Cutts announced Penguin 2.0 and made content publishers fear for their long-tail lives, as he often does, usually without so much of a warning.

In the days immediately before and following the release of Penguin 2.0, many of our Gold Members clients expressed concern about what exactly Google was looking for in their newest algorithm update and whether they would be affected.  Although Matt Cutt’s video seemed pretty simple and straightforward as he explained what we should expect from Google in the next few months, it was never particularly specific.

More than anything, there are always more rumors and panic prior to an algorithm update. The panic is sometimes warranted and we’re happy to have time to prepare. Other times, for  us “all white hat all the time” guys, it’s nothing to worry about.

So far, the damage from Penguin 2.0 has been fairly insignificant for ourselves and our publishing clients. Reports from across the web aren’t totally clean, but the consensus is an overwhelming whew!

As soon as Penguin “hit,” CEOs were biting their fingernails, asking us to watch the numbers on their sites. And we did. Norann, our Analytics Program Manager, has been watching them closely every day and comparing them across a wide variety of sites, in all different publishing niches.

So far, nothing. Here’s how we figured that out.

Norann waited a week until after the 2.0 dust had settled a bit to take a look at our Gold Member clients’ organic search traffic on Google Analytics. Knowing that Google’s wrath is swift and deep, we expected an immediate and obvious drop in organic search traffic for anyone who might be affected by this update.

After confirming reactions to Penguin across the web, it seemed pretty safe to conclude that if you didn’t see an immediate and dramatic drop in organic search volume, your site was not penalized by Google for a Penguin 2.0 violation.

Next, Norann extended the date range for the 11 days before and after.  On the surface, it looks as though everyone is doing worse, but that’s only because the “after” period includes 4 weekend days and the “before” period only has 3.  This second data set has no value.  It should be done at a 14 day interval to make sense.

Of course, I wasn’t too surprised by the results of her analysis.  The Mequoda System is built, and its operators are trained to be, “all white hat all the time,” and we work closely with our clients to ensure that they follow these best practices and remain mostly impervious to any penalties Google might inflict. 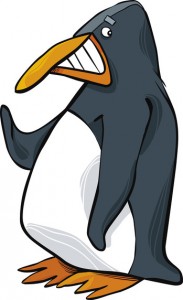 Penguin will continue to roll out throughout the summer, but to prepare, here are a few things you can start working on:

I’d like to know what kind of impact Penguin 2.0 had on your publishing business. If it had a negative impact, do you have any theories about why? Happy to speculate from afar, just leave a comment.