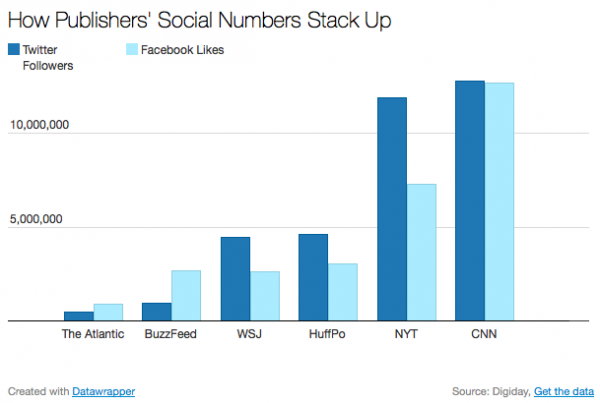 While Digiday is careful to point out that content still trumps follower counts, it also reminds us that publishers need as many arrows in the quiver as they can fit to promote that content.

Facebook and Twitter are two of the most effective arrows, and a recent study from Ricardo Bilton shows that CNN and The New York Times have the most likes and followers, while BuzzFeed, of course, has almost twice as many Facebook shares (10,431,698 in April) as its closet competition (The Huffington Post).

“Sure, BuzzFeed’s Twitter followers are an important element of its social media strategy, but that just barely gets the ball rolling,” Shareholic’s Danny Wong told Digiday. “A brand’s social media accounts can only do so much. Ultimately, it is the inherent shareworthiness of the content the brand produces.”

To read more about the savviest publishers on social media, visit Digiday.