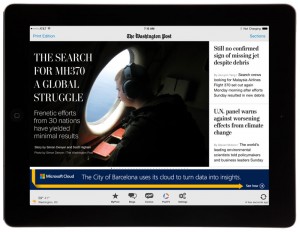 The Washington Post is switching from an HTML5 platform to an iOS native publishing framework for their iPad app.

D.B. Hebbard from Talking New Media writes, “The goal of the update, according to the app description, is faster loading of articles and galleries, and better scrolling. The update also ends the practice of stories being laid out on separate tablet pages – now the reader scrolls for the entire story, as they would do on a web page. The updated app also says it delivers better inline media support, as well as delivering higher resolution (retina) images throughout the app including galleries.”

This is the first time I’ve been tempted to buy an iPad. I use an android tablet currently but can see how the iPad would make the perfect reader. Also, I could then read the rest of this very interesting article.