The future is now at Bayou City 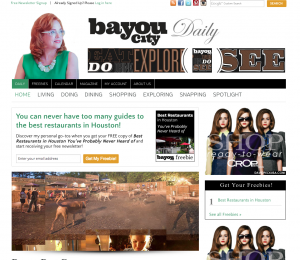 Bayoucitynetwork.com launched in early November, exactly one year after it was born in the minds of Becky Davis and Mark Standridge, Houstonians who had until then been publishing a traditional, “hyper” local neighborhood magazine as part of a franchise.

At the same time, their decidedly non-traditional print magazine was also born. Two weeks or so later, the digital edition launched – and all of it without the benefit of a legacy publication to drive content, traffic and revenues.

The most compelling reason behind their decision to get out of their franchise publication, attend an unusual little get-together called the Mequoda Digital Publishing and Marketing Intensive, and launch a brand-new magazine? The opportunity it affords them to take advantage of the latest technologies.

Unrestrained by industry norms of the past, Davis and Standridge have created a complete, multiplatform publishing company. Nothing about Bayou City is traditional:

This is certainly not your father’s city magazine. Traditionally, those editorial teams simply report on the who, what and where around their region. At Bayou City, however, the editors first identify lifestyle trends, which they translate into Houston life, and create content that conveys those trends as experiences.

Thus, when Davis decided to focus on a trend in nontraditional gifts, the magazine featured an article, Giving Back in Style from the November-December issue, about a couple who dedicates their home as a venue for nonprofit fundraisers.

Then, because Bayou City is a Mequoda-designed website, it has a portal with daily content, and a post titled A Passion for Giving focused on several of the couple’s most beloved charities.

Finally, Bayou City invites Houstonians to experience this for themselves at a special fundraising event in January at the restored 1910 home.

Davis explains that Bayou City focuses on “lifestyle spenders,” with whom they aim to connect with Houston businesses. The magazine is an entirely advertising-driven business model. At the same time, as a Mequoda-built site, it features plenty of the standard floaters and OFIEs promoting its own freebies.

Clearly, this is taking subscription website publishing to a whole new level!

Partly because they weren’t starting with a legacy print publication, and partly because they were planning a free publication supported entirely by advertising, Davis and Standridge were undismayed by the Mequoda Method’s focus on giving away free content in order to build an audience of consumers – unlike many publishers when they first hear of the concept.

“It made perfect sense,” says Davis, who liked the idea of giving value in return for getting a visitor’s email address. Naturally, that means posting plenty of content on the portal that’s optimized for organic search. The website is built with conversion zones so that first-time visitors are then greeted with a floater for a freebie related to their search. 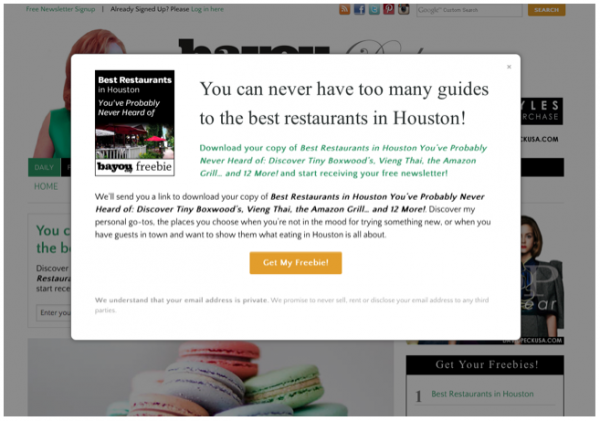 Of course, the home page is distinctively Mequoda with clear, simple navigation among its categories, OFIEs promoting the freebies, and plenty of new content every day. 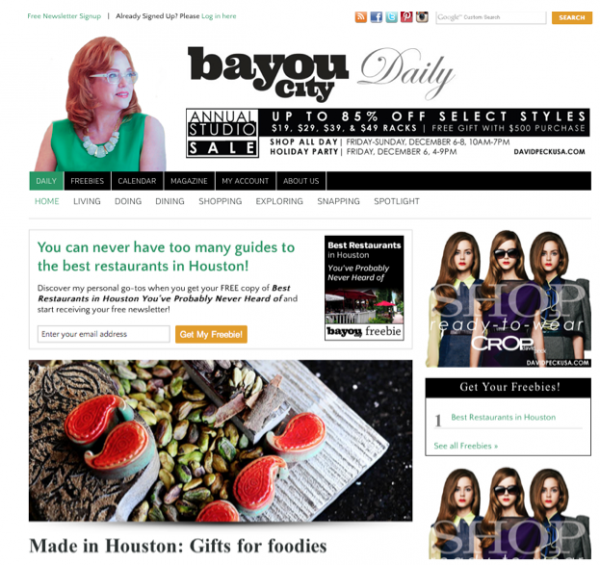 In addition to relying on SEO and website architecture, Bayou City is kick-starting its audience-building efforts with a paid email campaign to 72,000 city residents. The publishers are also planning on having a presence at two Houston events per month, such as, say, the Bayou City Art Festival, to distribute copies of the magazine and build brand awareness.

All of these efforts are having their effect: In just one month, the website has seen more than 1,000 unique visits. While Davis admits, as do most Mequoda clients, that facing up to a regular Mequoda analytics meeting can be daunting because of the sheer volume of data, she reports that her Mequoda consultants seem to be pleased with the company’s progress thus far.

Davis also points out that as a local magazine, Bayou City is going up against Google’s carousel, part of its new focus on being the entity that answers its users search questions, rather than helping searchers find their answers from someone else. A recent study drew the conclusion that quantity and quality of Google reviews drive the selection of results placed in the coveted real estate, leaving everyone else to scramble for second place.

Thus, Bayou City must be extra careful to create high-quality articles that will at least draw attention away from Google’s own preferences and to their own content, or even convince Google to reward them with a place in the carousel itself.

Subscription website publishing across different media is one way to do this; another is to keep their audience engaged and involved with events, both their own and those of other organizations. There’s also an intriguing category in their lineup: “Snapping” is an invitation to readers to send in photos the various pleasures of the Houston lifestyle – simultaneously giving readers a stake in Bayou City and gaining interesting new photography for the magazine.

The site came out great! Nice job everybody! 🙂