Almost 4x the number of visitors to their website than their print subscribers, and what do they do with the traffic?

Back on April 1 Don wrote a post entitled Saving TIME Magazine: or, the Future of All of Us. Don’s vision of the future, even for faltering weekly news magazines, focuses on creating a niche product like any of our clients or followers who implement the Mequoda Method, even if the scale is a bit different.

Don believes TIME could become a leader in the niche of thought, analysis and investigative journalism, putting its readers first, instead of chasing after the CNN general news model of snippets, soundbites, and tons of advertising.

Don also opined that the best leader for TIME, at that moment in the market for a new CEO, would be a magazine publisher or editor to help this transition – not someone from advertising or TV – and preferably someone who’d worked for Time Inc. in the past, during its heyday.

TIME’s website shows that it could eventually regain its former luster as a thought leader. And while TIME didn’t follow Don’s advice, hiring its former Chief Financial Officer, Joe Ripp, to take the CEO reins two weeks ago, perhaps even a finance guy can get this venerable brand focused back on content instead of cash.

Quoted in CNN Money, Time Warner CEO Jeff Bewkes said that Ripp is “a highly respected executive with a distinguished record of taking on difficult challenges and delivering financial results.”

It remains to be seen how Ripp chooses to deliver those “financial results.” One thing we do know is that, like all other legacy print publications, TIME has its financial woes. Circulation dropped 0.5% in 2011, according to Pew, and fell another 0.5% by the end of 2012.

The good news is that circulation is up in the first half of 2013! According to WWD, “Overall circulation at Time is up to 3.3 million, and single-copy sales are up to an average of about 58,000, an increase of 1.2 percent. Corporate-wide, Time Inc. claimed 2.8 million subscribers who get digital editions as a bundle with their print subscriptions, and about 500,000 who are digital-only.”

Even with the uptick in subscription sales, Time Inc. reported a $9 million loss in the first quarter (blamed on severance costs), while its 2012 annual operating profit of $420 million during 2012 was less than half what it earned in 2007. 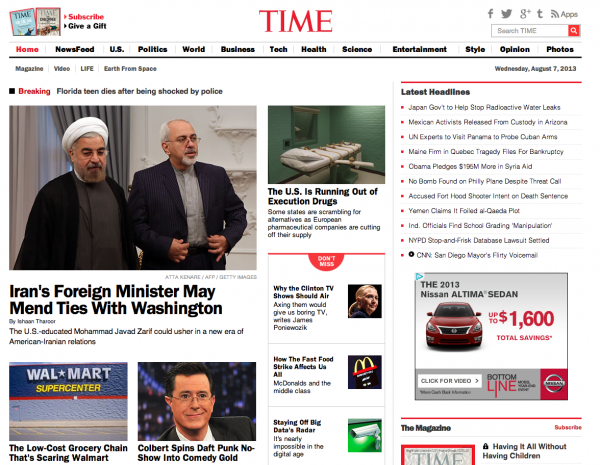 So TIME’s website is now front and center in the publication’s quest for relevance in the digital age. With an Online Magazine Index of 3.82 – an improvement over the 3.28 it had from July to December 2012 — it earns a B+ in Mequoda terms. Its average unique visitor count from January through June (12,617,572) is almost four times its average magazine circulation (3,301,056) for the same months – 3.8 to be exact – thus a 3.8 OMI. Anything higher than a 5 we would have scored an A.

The website, like that of The Economist, another general news weekly magazine which I reviewed recently, delivers free content in abundance, some on the news of the day, and some long-form, analytical pieces on other topics. The site is well-optimized for search.

The home page features the most recent content, and new content is added continually throughout the day. The articles are also found on other pages in various sections such as U.S., World, Politics, Business and so on.

Unlike at Economist.com, the calls to action aren’t triggered by a specific number of articles read. They only appear when you open a magazine article, where the reader sees “Subscriber content preview. Subscribe now or log in.” The first few paragraphs of the article follow.

Then, below the few few paragraphs of teaser content — which optimizes these pages for search engines — there’s another, much bolder call to action.

To find those magazine articles, follow the link that’s just under the main navigation bar at the left, directly under the “Home” link. Or, click here. The magazine’s opinion pieces and a couple of briefs are free, but even there, you’ll see text ads for the magazine.

Other calls to action to subscribe include a small banner ad at the top of the page and a cover image and link to the magazine in the right rail, which features a small “Subscribe” link. This section is just below a third-party display ad. 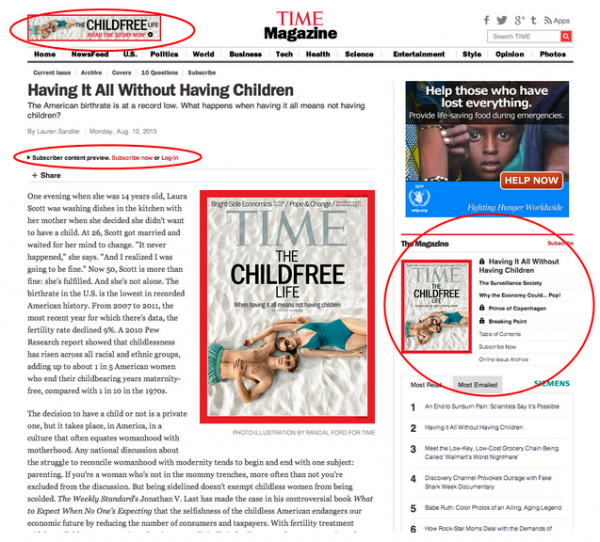 On the whole, the TIME website is a good place to get lost in (and forget why you went there in the first place!). Navigation is logical, its reporting and writing are solid, and the variety and breadth of subject matter available without a subscription is satisfying. If I were judging it solely on the pleasure it affords a reader, it would get an A+.

A major lack of conversion

Although we can boast all day about their impressive traffic numbers, we’re heartstruck by what they’re doing with all of it.

TIME offers 17 free email newsletters, one for most of their major publishing topics. Unfortunately, it’s not easy to find the link to subscribe to them. The link I just showed you doesn’t appear until you scroll all the way to the footer any page.

On free articles, TIME uses little effort to convert visitors into magazine subscribers. And the biggest problem with that is they’re not using the available space to at least convert those visitors into email subscribers so that they can sell to them later on. At the very bottom of the right navigation, at the starting line for comments, is a tiny subscription box. This brings a visitor to the page mentioned above, with all 17 newsletters.

The newsletters they offer, when you can find them, include Today’s Top Stories, Business, Money, Opinion, Healthland, Techland, Swampland (an entertaining name for politics), and more, such as cartoons, photos, LIFE photos and breaking news alerts.

But contrary to a Mequoda Best Practice, TIME’s emails don’t seem to sell anything other than their free iPhone app upgrade and their single non-magazine product. For that matter, there’s little to sell besides magazine subscriptions. Unlike The Economist, TIME isn’t monetizing its content or its brand especially well. There’s no store, no books, no calendars, no DVDs, no accessories – not even a teddy bear!

The single non-magazine product that I just mentioned is a framed print of the magazine’s covers, at $19.95. Even the archives are available for free to subscribers, unlike the $160 complete archive book that The Economist sells. TIME has a lot of articles, photos, cartoons and other branded content that it could sell, however, and this is a rich vein that TIME will hopefully begin exploring under its new, financially-savvy CEO.

In terms of converting all their traffic into magazine subscribers, they could be doing a much better job. They could start by building a bigger email list, and then by building email templates that are better at selling the magazine. More on that later.

While The Economist eschews SEO and organic search, TIME does a great job at driving traffic. In fact, as I noted before, they drive 3.8x more traffic than their print circulation. Although their titles — like most news sites — aren’t always keyword optimized for niche phrases, they have no trouble being indexed just because they’re posted on TIME.com, which has an excellent reputation for good content.

Free articles use the correct URL syntax, including the name of the post in their URL, while paid articles do not. For better SEO on those jewels of conversion architecture, we’d recommend optimizing the paid articles better than any other articles on the site.

Just for fun, I did a little Google research on some of the hot topics of the day. For “shark week,” a popular and fun topic in the news right now, TIME is on page one. A news article called Shark Week: Dead Shark Found in NYC Subway Car pops up second in Google, behind only the Discovery Channel and ahead of worthy rivals such as Wikipedia and CNET. 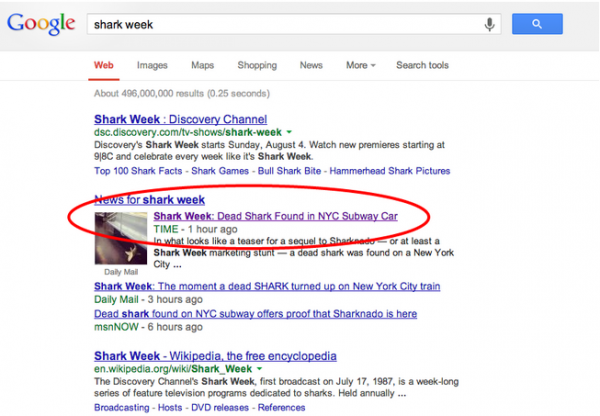 TIME articles are included in Google News, which gives them prominent placement in news results.

This isn’t to say that we think TIME should focus on news articles though, because their prominent Google News status only lasts moments. Once other credible sources post about the same topic, those newer articles push TIME down the list until they’re invisible.

While searching for evergreen topics, like names and events, TIME showed up more often. They have knack for keeping rank on their long-form pieces.

This would seem to validate Don’s belief that long-form, investigative or feature journalism should become TIME’s primary focus, rather than the day’s big news.

Also, as a sidenote, think a little harder about your Next Issue app venture. When I came upon a paid article I wanted to read, I decided $30 bucks for universal access to 53 issues was a great deal. But right before I hit the “confirm subscription” button, even after I entered all my payment information, I quickly remembered the Next Issue app on my iPad and abandoned the sale. Free is free!

It will be fascinating to watch what TIME, under its new CEO, will do going forward to rescue its brand. What do you think of the choice to hire a finance executive to run the show? Will TIME make any substantive changes to its business model in the near future? Will it survive? Let me know what you think and why. TIME’s failure would be a tragedy for all of us in magazine publishing.