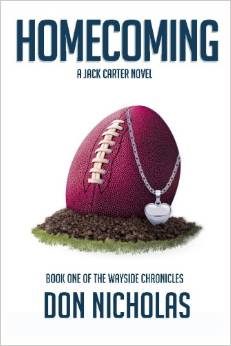 BOSTON, MA, January 30, 2015 – Don Nicholas, a journalist-turned-publishing consultant-turned novelist, has just published his first novel, Homecoming, a mystery inspired by many of his favorite writers and characters – and also by small-town politics, social life and true crime.

Nicholas’s first novel is another step forward in his and his company’s evolution. His current company, Mequoda Group, of which he is founder and CEO, is a leading publishing consultancy and software firm working with niche content publishers in the digital age.

At the same time, Nicholas is a natural writer, returning, like his hero, Jack Carter, to his roots. “After three decades of journalism and consulting,” says Nicholas, “I’ve returned to the medium that attracted me to the publishing industry in the first place: storytelling.”

“While I love my day job as a journalist, teacher and publishing consultant,” he adds, “in my heart I want nothing more than to tell stories that enlighten and entertain people.” As anyone can attest who has attended one of Mequoda’s quarterly seminars, or heard him speak at numerous industry events, he’s a born and quite enthusiastic storyteller indeed.

Nicholas is a longtime resident of a town quite similar to Wayside, where Admiral Jack Carter has recently returned after his 37-year Naval career to become the town’s chief of police.  There, he wrestles with local politics, serious questions about his relationships with family and with three different romantic interests, and two separate murders.

Nicholas wrote Homecoming after decades spent as a dedicated reader of mysteries, thrillers and historical novels. But his writing career actually began with a stint as a writer-producer for the Armed Forces Network while serving aboard the USS Enterprise as a nuclear engineer. From there, he earned his journalism degree and went on to work for Sacramento Magazine and Houston Home & Garden, before founding four separate companies over the years within the magazine publishing industry.

He holds a BA in journalism from California State University-Sacramento and an MS in organizational management from Capella University.

In addition to Nicholas’ insightful observations of his community and his love of mysteries, Homecoming also reflects time in the Navy, love of sailing and fondness for pug dogs.