Harry Schuhmacher is a former beer distributor, an accomplished online journalist and a savvy marketer of his information products. He founded BeerNet Communications, Inc., in 1997 and today is the editor and publisher of two sharply focused newsletters about the beer industry, Beer Business Daily and Beer Distributor Monthly. 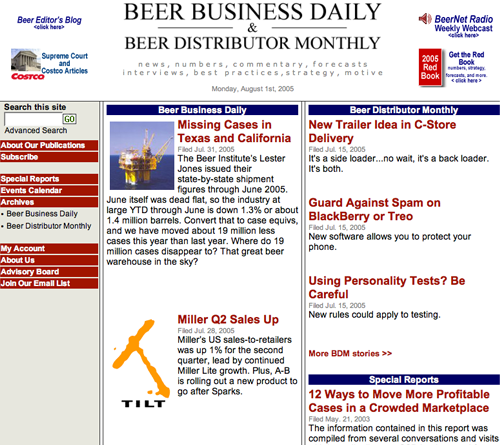 Harry Schuhmacher is a former beer distributor, an accomplished online journalist with a breezy writing style and a savvy marketer of his information products. He founded BeerNet Communications, Inc., in 1997 and today is the editor and publisher of two sharply focused newsletters about the beer industry.

The second publication, Beer Distributor Monthly, also known as The Distributor Productivity Letter, is a six- to eight-page collection of best practices and proven ideas designed to save distributors money and increase sales.

When taken together, these newsletters provide beer industry executives with as much useful information in as little space as possible. Mr. Schuhmacher’s motto is simple: read less, know more.

“Our vision of the beer world, our style and our whole philosophy are somewhat different from other trade publications. We are international in scope. We stress the links between politics, personalities and business. We are irreverent and we are independent,” says the BeerNet site.

These are no-nonsense, business-to-business publications. Both are delivered via fax and can also be accessed online at BeerNet.com. Yes, Beer Business Daily has about 200 subscribers who still prefer to receive the publication via fax! But the majority prefer to read the publication online. They receive an early morning email that contains a hypertext link to that day’s issue.

Mr. Schuhmacher also provides email subscribers with a weekly audio webcast and online access to all back issues.

The BeerNet.com site is password-protected, and the technique of sending only the link via email—not the entire issue’s contents—is a deterrent to unauthorized sharing. But that’s not Mr. Schuhmacher’s only anti-theft scheme.

“Our publications are expensive by design. Their price keeps the readership to a manageable few who are serious about exploring the tough issues in the beer industry.”

“Our publications are expensive by design, not blunder,” Mr. Schuhmacher says. “Their price keeps the readership to a manageable few who are serious about exploring the tough issues in the beer industry.”

That niche market of beer industry insiders is small—a universe of only about 5,000 people—but very loyal.

“But our renewal rates are extremely high—over 90 percent,” Mr. Schuhmacher said in a recent interview. “That’s because the content is good, and a lot of it is stuff you can’t get anywhere else.

“People get very accustomed to it and when it doesn’t show up in the morning, because they let their subscription run out, they call up pretty quick. It’s not something that they forget that they subscribe to.”

In order for a business like BeerNet Communications, Inc., to grow, it needs additional products and subscribers. So the company introduced a $900 annual compendium of brewery data (The Red Book), available as a physical book, as a CD and as a PDF file online.

And last year it began an annual summit at which about 200 attendees were addressed by industry leaders such as August Busch and Peter Coors—names that are recognizable even by those of us who are not part of the beer business world.

But finding additional subscribers for its highly targeted, niche information, especially when the universe is estimated to be only 5,000 people, is a formidable challenge. Or perhaps not… if you’re Harry Schuhmacher.

“The beer industry is a tight little group,” Mr. Schuhmacher said. “It’s not an industry that people pass in and out of. A lot of these guys—their families have been in the business literally since the repeal of Prohibition. If you’re in it, you’re in it for life—like the Mafia.

“The good part about that is a lot of the new subscriptions we get are by word of mouth. The bad part is that there is a lot of forwarding and sharing of passwords.”

Mr. Schuhmacher reasoned that many in the beer industry were receiving pass-along copies of Beer Business Daily without bothering to pay for their own subscription—or considering the consequences of these copyright violations. So he began to occasionally print at the bottom of the newsletter a plea for understanding.

It used to be a gentle reminder, something along the lines of “Please. This is not advertising. This is paid content only. Please do not forward this email.”

These days, it’s more threatening, and with a touch of hyperbole:

It is illegal to photocopy or forward this email under copyright law. Violators will be prosecuted, drawn and quartered, strung up…

“It’s just a reminder, because a surprising number of people don’t know that it’s illegal to photocopy a copyrighted document,” Mr. Schuhmacher said. “They think they’re doing absolutely nothing wrong by forwarding it to 20 of their best friends. So having that kind of funny reminder doesn’t offend people. And I change it up on a regular basis. It gets the point across that one person equals one subscription.”

Editor’s Note: One person = one subscription. All of us in the publishing industry should raise a glass to that!

Site Licenses to the Rescue

Then last year, Mr. Schuhmacher introduced site licenses. Companies that order 10 or more subscriptions are eligible for a $100 price reduction on each. That’s a whopping 26 percent discount. There are only two conditions: the 10 subscriptions must all carry the same expiration date and must be paid from one annual invoice.

This technique is working well, Mr. Schuhmacher reports, citing one company that began with 10 subscriptions and eventually signed on for 100. So despite a reduction to $280 net per annual subscription for Beer Business Daily, the site license pricing strategy has actually increased paid subscribers and revenues.

Even so, many of the breweries continue to have multiple subscriptions to Beer Business Daily without bothering to coordinate their payment to take advantage of the volume discount.

Recurring billing has been around almost as long as credit cards. It is sometimes referred to as “till forbid.” When the subscriber initially signs up, he agrees to allow an automatic charge to a credit card each year, unless and until he contacts you to unsubscribe.

All subscribers to Beer Business Daily are automatically renewed unless they cancel. About 60 percent pay by credit card; the others are sent an invoice. But that renewal series comprises only two efforts. After that, if a subscriber doesn’t pay, Mr. Schuhmacher simply cuts him off.

Few subscribers complain or cancel or seek chargebacks, and automatic recurring billing has been a great boon to his business, says Mr. Schuhmacher.

“Initially I was very reluctant to do automatic renewals, but we were spending an inordinate amount of time calling people for their credit card number or billing them to get a check, usually because they simply forgot,” said Mr. Schuhmacher. “So we tried it. We told everybody that we’re going to auto-renew your subscription unless you call or email us that you don’t want to renew. We’ve had very few if any complaints. In fact, I can’t even recall one!”

I’ll drink to that, too!