By refocusing on its core business, this special interest B-to-B publisher has increased revenues four fold since 2000, deriving 80 percent of its new business from online marketing.

FDAnews is the premier provider of domestic and international regulatory, legislative and business news and information for executives in industries regulated by the U.S. Food and Drug Administration.

In a brand and audience focusing exercise, FDAnews president Cynthia Carter launched FDAnews.com when she recognized, immediately and intuitively, that the FDA information at her new employer’s publishing company was a small portion—perhaps 20 percent of the entire content—but accounted for 80 percent of revenues.

That was in 2000. Today, FDAnews has in excess of 75,000 unique names in its marketing file. Each of these is a subscriber to at least one of seven free email newsletters and is worth an average of $65. In the past six years, the publishing company has increased revenues four-fold, aggregating 80 percent of its new business from online marketing.

FDAnews is the premier provider of domestic and international regulatory, legislative and business news and information for executives in industries regulated by the U.S. Food and Drug Administration.

The FDAnews audience is comprised of top executives and managers in the pharmaceutical and medical device industries. Nearly 20 percent of FDAnews customers are in CEO or senior executive positions; another 46 percent are regulatory affairs and quality assurance professionals.

FDAnews readers also include attorneys; clinical and scientific professionals; and operations and manufacturing managers. Eighty-two percent of FDAnews customers are based in the United States, with most located in New Jersey, New York, Pennsylvania, Washington, D.C., or California, mirroring industry demographics.

Pharmaceutical and medical device professionals rely on FDAnews print and electronic newsletters, books, special reports and conferences to stay in compliance with international standards and the FDA’s complex and ever-changing regulations.

In 2000, when Cynthia Carter became president of what was then known as Washington Business Information, Inc., the company had 10 subscription-based newsletters that produced 95 percent of its revenue. Additional assets included a database of 1,800 names and email addresses, plus a website. The company’s product portfolio included some FDA product information. 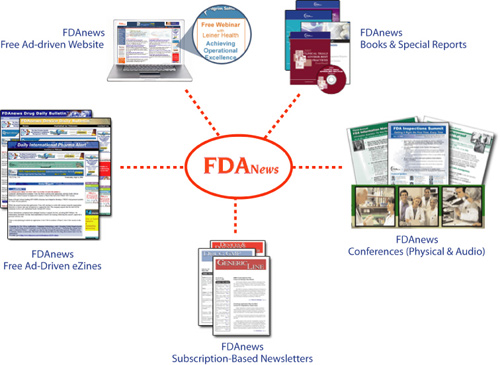 Ms. Carter immediately recognized that the FDA product information accounted for about 80 percent of the company’s revenue and quickly decided to focus on that niche of the business. She soon sold off all the non-FDA products. She then launched a new website, FDAnews.com.

“I really saw the growth of the company coming from the FDA side, in the drug and device side of our business, so we decided to focus on that,” says Ms. Carter. “I knew that subscription newsletters were not going to be a high growth area for us going forward. Sales were flattening out. I knew we had to diversify.

“I looked at what other publishers that I admired were doing in terms of best practices, and, to be honest, cash generation. We needed cash. And I looked at the existing competition in the Food & Drug space.”

In a brand and audience focusing exercise, Ms. Carter launched FDAnews when she recognized, immediately and intuitively, that the FDA information at her new employer’s company was a small portion—perhaps 20 percent of the entire content—but accounted for 80 percent of company revenues. 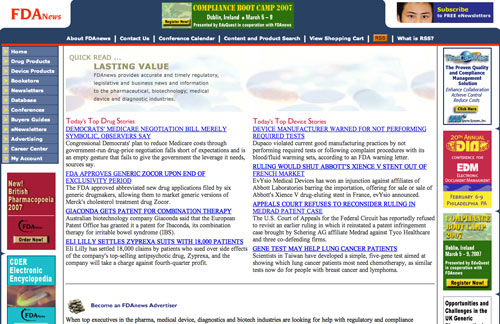 “The concept was to aggregate and basically, to create a portal,” says Ms. Carter. “I wanted a brand and a web presence that focused on what we do. And the question was, ‘How do you do it without spending a fortune?'”

Today, FDAnews.com is a gateway to both pharmaceutical drug and device news; newsletters; books; conferences; buyers guides; white papers; and all manner of FDA information. 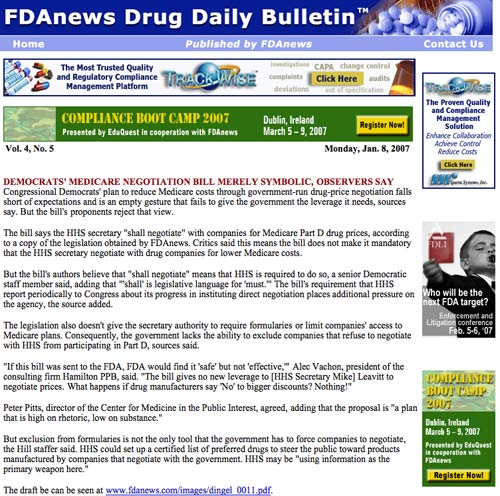 As the target market for FDA New is executives at pharmaceutical and medical device companies at the director level and above, the target advertisers are companies that sell products and services to this elite customer base.

“I wanted the eyeballs for ads, and the email list to sell other products to,” says Ms. Carter. “That was our next step. We went out and found names and added them to the database, back in the days when you could do that. Compiling names was okay (legal), and pretty quickly we got up to a 10 or 15 thousand name list. We created a pretty good product because we had the blessing of really good content.”

Today, space ads are available in all FDAnews subscription-based newsletters, which have a range of readership from 500 to 3,500 top industry executives. Monthly banner and text ads sell for as much as $5,000.

Ms. Carter says there isn’t much difference between print and online delivery, or between direct mail and email.

“To me, it’s all about the content,” she explains. “How you package the content is different, depending on the medium. It was just making it shorter. It’s in HTML as opposed to the print world that I had come from.”

At one point, FDAnews was sending as many as eight email blasts (marketing messages) daily to its entire list of opt-in subscribers.

“The fascinating thing about all of this is that our opt-outs have never, ever exceeded one percent a month,” boasts Ms. Carter.

“There are a lot of ways to slice our database, which I think is one of the biggest challenges going forward, because not only have we got some subscribers who are drug people, and some who are device people, but some are both.

“Across that strata are clinical trials people, and manufacturing people. They don’t make both drugs and devices, but the issues are often the same. Others are interested in regulatory affairs.

“We have a very complicated matrix,” Ms. Carter said. “We’re now up to nearly 75,000 unique names in our marketing file. Our challenge is, ‘How do we get the right email to the right group of customers?’ We’re always refining it.”

“Here we were with this list, and we were starting to sell ads and we were having success, and pretty quickly we decided we were going to try the audio conference world,” Ms. Carter explained.

FDAnews started with hot button issues such as the (then) new FDA Part 11 Regulations.

“We had gotten advance warning that this rule was coming out in about a week, and we knew that nobody really understood it,” Ms. Carter said. “And we had already identified a great (subject matter expert) speaker.”

So the publishing company was able to do what ever great business does—anticipate, get ahead of the demand, create the product (an audio conference), and market it effectively to an audience of rabid customers. They immediately enticed 40 customers to sign up at $345 for a two-hour audio conference.

“We did this one week after the rule was issued and we were so far ahead of our competition, we were able to stay ahead,” says Ms. Carter. “But pretty quickly, people in the industry began copying us. There are lots of us now doing it.”

That was the first FDAnews audio conference. In 2006, the company will do 60 such live, online seminars, on topics ranging from crisis management to minority recruitment. 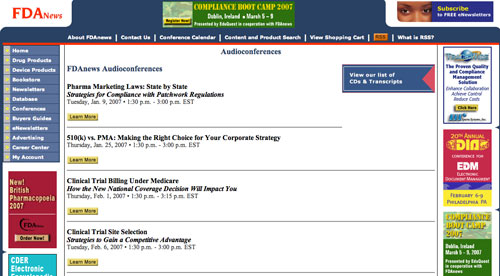 In 2006, the company will do 60 live, online seminars,
on topics ranging from crisis management to minority recruitment.

Additionally, the company sells encore presentations of its live seminars. At their convenience, customers can dial in and hear the recorded presentation for up to three weeks after the live presentation. The publishing company also sells audio CDs and transcripts of these events.

FDAnews employs 30 people, of whom three in the conference group are responsible for running all 60 webinars and seven physical conferences annually.

In the newsletter and book division, 13 people are editorial; they create all the book and management report products, as well as all the editorial content for the seven free email newsletters.

All the free email newsletters are created by one entry-level staffer, who draws content from all the other (paid) products. An RSS feed is used to monitor additional online sources of content. 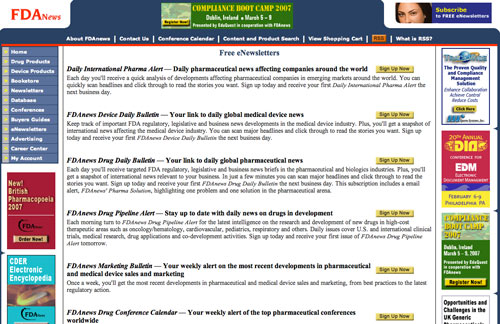 The FDAnews marketing team is comprised of four people who market all of the publishing company’s products. 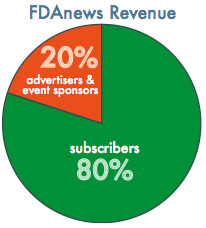 FDAnews subscribers account for 80 percent of revenue, while the remaining 20 percent is generated by advertisers and event sponsors.

Today, the company publishes eleven paid newsletters that range in price from $525 to $1895. These subscription newsletters, some of which are delivered electronically, represent 48 percent of total revenue. Newsletter subscription income has remained flat, according to Ms. Carter. The company’s growth has come in audio conferences, books, management reports and advertising.

The publishing company sends staffers to six or eight industry trade shows annually, primarily to gather names for its free email newsletters (double opted in, of course). Sometimes the company offers free special reports as an incentive to opt in to a free email newsletter. 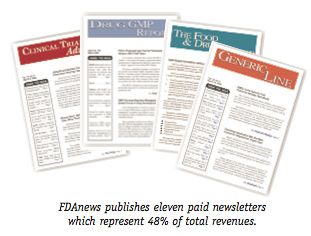 The management reports are hot sellers, according to Ms. Carter. The company publishes about 50 management reports annually and each gets its own email and online marketing campaign. An example: FDA Advisory Committees: Perils and Profits, 2006 Edition, published October 2006, 238 pages, book only: $295, CD only: $295, book/CD-ROM set: $443.

She tracks “eblasts” (free email newsletters) by segment of database, of which there are now 10, measured in revenue per week and per month.

Each free email newsletter subscriber name is worth an average of $65 annually, she confirmed.

“We have more than one customer who will spend $15,000 on the basis of a single eblast,” Ms. Carter said. “And it happens fairly frequently.”

Not everyone can turn around a stagnant publishing enterprise as quickly as Ms. Carter has done. Her extensive business experience and intuition enabled her to foresee the flattening of one market and the advent of another, more promising publishing opportunity.

Under her management, FDAnews has obtained a premier position in a lucrative niche where executives of highly profitable companies are motivated and  not hesitant to pay for premium information.

Significantly, she and her staff have demonstrated an enviable ability (1) to study emerging best practices, (2) to be flexible and adjust to change without resistance, and (3) to explore and embrace the profit potential of new media.