While competitors have chosen to make their sites free and keep the gates to content open to all visitors, The Wall Street Journal went the path less traveled, and is now well known as the largest paid content news site with 744,000 subscribers.

Looking back, with 10 years under their belt in the turbulent online publishing world, success was never a guarantee. The success of the paid content strategy of The Wall Street Journal is the result of drawing a line in the sand, and focusing everything else behind that decision.

WSJ.com’s successful subscription strategy has hinged on these important criteria:

Looking deeply into the history, strategy and tactics of the subscription-based leader will give an in-depth view of how to win with the paid content model.

The Company—Dow Jones and The Wall Street Journal

The Wall Street Journal is the second largest print newspaper in the United States. As of 2005, the U.S. average daily circulation is 1.8 million, with a total of 2.6 million worldwide. Founded in 1889 by Charles Dow, Edward Jones and Charles Bergstresser, The Journal is currently owned by the public company Dow Jones. In recent years, the company experienced the same belt-tightening felt throughout the industry—since 2000 employment roles have been reduced by 17 percent. Things are looking up for shareholders in the last year as Electronic Publishing revenues (the segment where WSJ.com revenues are reported) in 2004 were up 18 percent to $381 million.

Because WSJ.com holds such an enviable position in the online publishing world, it’s helpful to place the site in the context of the impressive plethora of content products in the Dow Jones stable—balancing several brands, customer segments and revenue models. This list helps to understand the resources at the disposal of the front-line managers of WSJ.com, and it also shows the company strategy in a larger context. Dow Jones has several paid content models in the B2B segments, such as Dow Jones Newswires; but WSJ.com represents the only paid content model in the Consumer Electronic Publishing segment—all the other consumer-based online properties are advertising based.

“The Wall Street Journal Online at WSJ.com is the flagship product of Consumer Electronic Publishing.” As this implies, WSJ.com is branded slightly separately from the print edition, (discussed in the WSJ.com Mequoda Website Scorecard). It saw the first digital light of day in 1995 as an electronic supplement to the Money & Investing section. The following year the site grew into the subscription based “The Wall Street Journal Interactive Edition” with 50,000 subscribers by December 1996. (see strategy section for subscriber chart)

Balancing out the gated WSJ.com, the brand is extended into an online network of free sites (see above), with more niche audiences who are good WSJ.com subscription prospects. In addition, the recent January 2005 acquisition of advertising based MarketWatch.com indicates a slight shift in tactics—acknowledging that free traffic can be an effective way to create subscribers, and that the balance of subscription/advertising revenues always requires some tweaking.

While WSJ.com has its own talented editorial staff, it is unrealistic not to acknowledge the editorial heft backing them up with the Dow Jones network of 1,800 business and financial news staff worldwide. This is one of the largest news networks worldwide, and helps the 60 editors and reporters on staff at WSJ.com to create an enviable amount of content. This is an example of how a publication can leverage existing assets when creating a whole new business.

Yes, WSJ.com has robust content, but so do competitors such as FT.com and Forbes.com. The strength of the subscriber base rests not on the content of the site alone, but on the brand behind it. Being the “journal of record for the business world” gave the fledgling WSJ.com a leg up in the early years. Many competitors chose instead to immediately target a large audience, bringing in as many eyeballs as possible with free content. Later, they found themselves in a trap, unable to require payment for something people were used to getting for free. By starting with a gated site early on, WSJ.com ran no risk of losing readers. The site showed visitors headlines, but no more. The message was clear: this premium brand-name content has value and comes at a price. The next task was to implement the paid content strategy decision, and to leverage the content to build subscription revenues.

The decision to go with a paid content model requires designing a site that facilitates that behavior. That is, it should show enough content that a visitor immediately sees something that they want to read, and it should make subscribing as painless a process as possible. Sounds easy, but these hurdles are where many paid content sites trip up.

WSJ.com has excelled in subscription-based online publishing because the strategy is played out in the website design and architecture. As reviewed by Mequoda (How WSJ.com Sells $84 million in Subscriptions, and the WSJ.com Mequoda Scorecard Website Design Review) WSJ.com clearly identifies for visitors the three questions that immediately come to every mind:

The site has been well designed to encourage both print and online subscriptions, with subscription advertisements in top locations on the homepage, and when a visitor clicks on a headline they are blocked with a “Login or Subscribe” page. Advertisers have had to take a back seat to content and interactive tools in the site’s layout and functionality, increasing the value of the product to the paying subscriber.

The large subscriber base is a result of the ease of subscribing for the visitor:

Being a gated site, WSJ.com is invisible to search engines and many have argued that because of this, and because bloggers don’t link to closed pages, the site will become irrelevant. Given the lack of organic traffic created by the firewall, the subscription growth rate is pretty impressive. 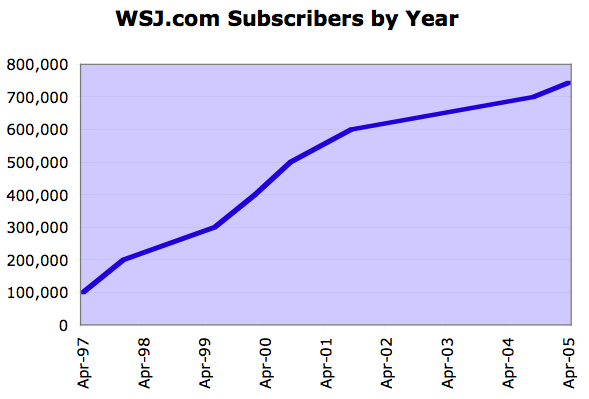 Recent activity by WSJ.com indicates a willingness to experiment with the placement of the gates. A marketing campaign in late 2004 opened the gates of the site—free to all visitors—for one week. This well-planned campaign included a lot of PR buzz, and is credited with the big jump up above the 700,000 mark to the current 744,000 subscribers—a feat that might have taken three times as long had the trend line stayed on the same trajectory. In addition, a few stories a day have been brought in front of the firewall, including some interactive features such as podcasts and video. This will increase bloggers’ attention, increasing online traffic and linking, while keeping the majority of the content behind the gates and maintaining the value of the subscription.

No one lives on subscriptions alone. However you have to balance the needs of the two groups—your subscribers don’t want to be blasted with too many annoying ads, or else why are they paying you?

For a site such as Forbes.com, with over 10 million unique visitors per month, advertising inventory is the point of each page served. The effect that the strategy has on the site design becomes clear when you compare WSJ.com to Forbes.com. On a typical Forbes.com page, there are twice as many advertising spots than found on WSJ.com. That being said, WSJ.com offers advertisers an impressive demographic. Just taking one statistic to illustrate the point, the average HHI of a WSJ.com reader is $215,000 compared to Forbes.com HHI of $114,000.

Advertising revenues can be a tempting strategy—especially as (shocking to admit, but there’s more to this than just money) publishers publish because they want to be read—preferably by as many people as possible. Isn’t it better to let the readers in for free and pay for the site some other way? But as seen in the recent online advertising downturn of 2001, relying on advertising revenues alone is also a risky strategy.

WSJ.com started with a leg up in the world. The famous brand name and the resources of a large publishing company made it possible to choose the controversial paid-content strategy from the beginning, before anyone knew what publishing online would eventually look like. However, it was the skillful leveraging of those assets that made the subscription strategy a success. We’ve seen how managing the WSJ.com brand within the network of sites, strategic site design and continuous attention to the balance of traffic to gated content, have contributed to the market-leading position currently enjoyed by this venerable old site.