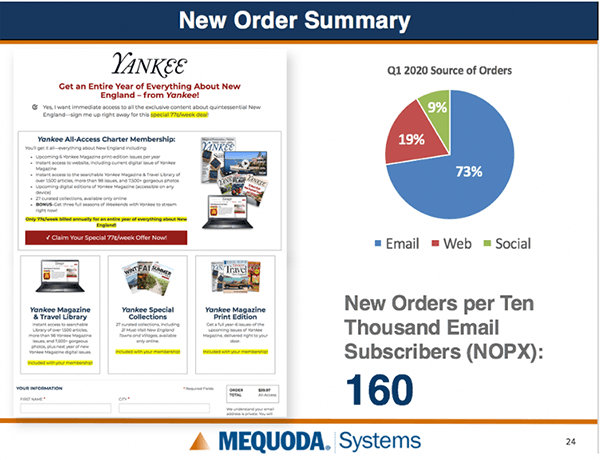 Now we’re getting into the order production. What we’re looking here on the left is the order page. One of several that we test, these are also just like those Spotlights, we have order page frameworks, this one’s called an NC4, meaning no choice, four boxes. So this top box is selling that all-access charter membership and the three pillars underneath, we’re using to highlight different aspects of the membership that we think they’re going to find most valuable. And we test this too, what elements and how and what order. But what we’re looking at is a winning formula here.

Kim Mateus:
And then on the right, you can see where the source of their orders are coming from, and far and away email is the largest source. They do pretty well on social, and some orders just come in on the web as well, but this is really an email database marketing system that relies on having a large, healthy, cleansed, engaged email file, which is why we spent that time upfront talking about how you lead into something like this and are able to get these metrics. Then in terms of how we measure, I guess the revenue performance, Don, you want to talk them through this new orders per 10,000 subscriber metric that we’ve settled on after a long time of thinking about the best way to high level the health, if you will, of the list?

Don Nicholas:
Of the program overall? Yeah. And Kim, again, to your point, we have a bunch of downstream metrics for every one of the campaigns preview Spotlights that gets sent out. We measure orders per 10,000 efforts, we measure revenue per 10,000, RPX, OPX, but as you know, it’s sometimes three, five, seven touch points before you get somebody to actually place the order. There’s a fair amount of body research, it says somebody probably gets to the order page, three to five times before they finally place the order telling you that the purchase process is cumulative over time and you have to have some macro metric.

Don Nicholas:
And the one we came up with… We actually were looking for a metric to use to do forward forecasting, 12 months, three years, five years long term, and NOPX ended up being it, new orders per 10,000 email subscribers, active email subscribers. And in this case, it’s the Spotlight list that we use to measure that. So in a nutshell, if we had 100,000 people who weren’t already subscribing and who were on that Spotlight list, which 100,000 is 10, 10,000. So this 160 would play out to about 1,600 new orders per month on a list of 100,000 active non-subscribers, meaning they’re active, they’re opening, they’re up against that 90-day hygiene screen, but they’re not one of the 25 to 30,000 people who have already become all-access subscribers.

Don Nicholas:
And to give you an idea, the range on this number, a sheet goes anywhere from 10 to 200, Yankees’ one of our better performers. And the average across all the systems we work on, at price points that range from five and $10 on the introductory offers up into the hundreds of dollars, ends up being somewhere between 80 and 100, I think 92, the last time I looked at it. And when we sit down to do business planning now, we can look at products that have similar prices, and this NOPX is really become the guiding metric around key monetization for a member-driven business model. 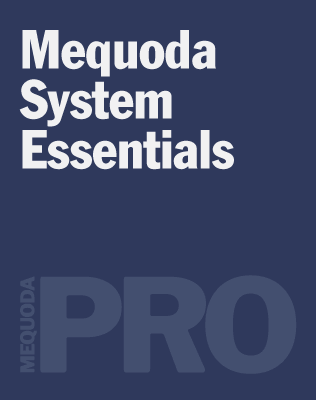