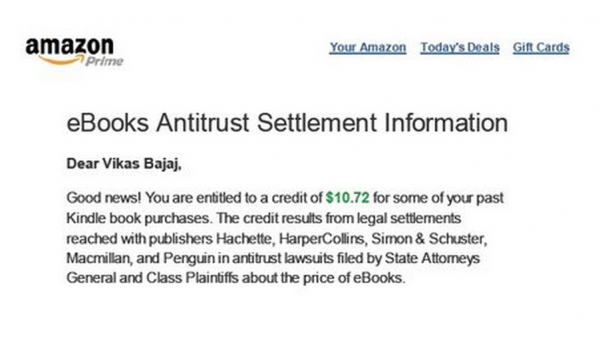 Anyone who bought an ebook on Amazon between April 1st, 2010 and May 21, 2012 just got an email with a credit usable on Amazon. Slate reports the backstory:

“In 2012 state attorneys general led a class action lawsuit against the five largest book publishers in the U.S. for e-book price-fixing. In a related case, they sued Apple for conspiring with the publishers. And though Apple is still contesting its involvement in court, the publishers (Hachette, HarperCollins, Simon & Schuster, Macmillan, and Penguin) settled with regulators. Now Amazon is beginning to distribute the settlement. The company prominently notes, though, that “Amazon is not a party to these lawsuits.” Meaning Amazon itself wasn’t sued.

The amount of the refund is based on how many Kindle books you bought, and if they were New York Times best sellers, according to Slate.

Read the full story on Slate and NYTimes.