A hot new tactic for increasing landing page conversion rates for every entry point on your website is called a Floater. While it may look like a pop-up, it’s not. Floaters do not open in separate windows and therefore cannot be blocked or banned. Website publishers we’ve talked with report a two to three times increase in conversion rates when pop-ups are replaced with Floaters.

Although a Floater looks like a separate document floating on top of a website page, it is really just a layer in the HTML code. To the user, it looks a lot like a magazine blow-in card. While printing blow-in cards and inserting them into print products is cheap, Floaters, like their Pop-Up predecessors, are virtually cost-less. Like blow-ins and Pop-Ups, Floaters can irritate users if over used or used to promote offers that seem out of context to website users. 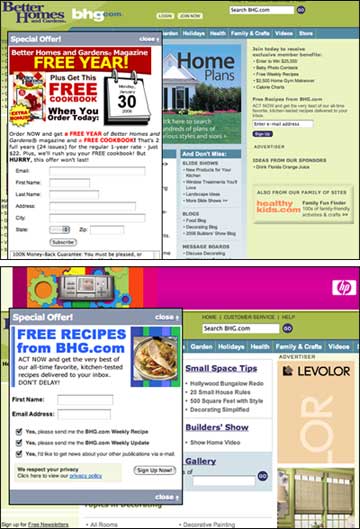 Example of Floaters on BHG.com