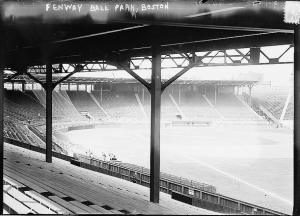 Imagine that you’re Tom Werner, owner of the Boston Red Sox back in 2002.  Fenway Park, home to the Boston Red Sox, is on your “to do” list and you have the constant pressure of knocking down and rebuilding the oldest professional baseball stadium with a field that’s still being played on.

The stadium was practically busting at the seams back in 2002 trying to accommodate every father bringing their son to their first ball game; every nervous boyfriend proposing to their girlfriend on the Jumbotron, and every die-hard season ticket holder.

But Werner didn’t believe that Fenway needed to be rebuilt. He knew that this valuable piece of real estate was worth keeping; all he needed to do was make it better. And that he did.

In Peter Guber’s book, Tell To Win, he tells the story of a conversation he had with Werner back in 2008, just a couple years after they “reversed the curse” and won two world series. “In Boston, Fenway Park is the enduring star”, he said. Instead of tearing it down and starting over, he decided to start upgrading. While construction was under way, he found ways to reignite the flames in people’s hearts for this beloved stadium.

When The Red Sox were away for a game one year on Father’s Day, they decided to invite fathers to come and play catch with their sons and daughters on the field. More than 25,000 dads and kids showed up.

All Tom Werner did back in 2002 was start to repurpose what he already had. That’s what we’re trying to do as online publishers.

He had a historic old building that people already loved, just like you already have amazing content on your blog that people have commented on and praised you for in the past.

Just like our blog content goes stale, so can the stigma for an old baseball stadium, even if your favorite players are there every other night.

So like Fenway, we need to learn how to rejuvenate old content. You can probably find at least 100 old articles on your blog that can be spruced up and made new. When Fenway needed to expand, Werner didn’t knock down Fenway and start from scratch. He worked with the amazing property that he already owned.

You already own amazing content. If you wrote a fantastic article in 2008, there is likely a way that you can bring it back to life, whether it’s by updating the information in it, or excerpting content for a new story. You might even be able to use it in a new article where you link back to old content.

You’ve got the content… now start hitting it out of the park!