A friend of mine sent me a printout of the landing page promoting a copywriting course from American Writer’s & Artist Inc. He wanted to know if it would be worth it to him to enroll in the AWAI course. I was impressed that my friend, a skilled writer who has done national infomercials and other projects, was interested in this letter. It takes a lot of sales skills to tempt a semi-cynical infomercial writer.

I couldn’t really tell him definitively how he would benefit from the course if he took it, but I did decide to put the landing page through the Mequoda Scorecard and see how it fared. The site is a classic in the long-copy tradition. The landing page sales letter printed out to 18 pages. I love long copy, but let’s see what the scorecard has to say.

“Retire this year… and still make more money than most doctors.” OK, that’s pretty clear… and pretty tasty. The subhead lets you know that there’s a secret that will help you accomplish that happy goal. Anybody who’s ever paid a doctor bill will be able to relate to this message. And they keep the theme throughout the letter. It’s clear that these folks want to sell you a secret that they say will help you amass a fortune in copywriting fees. 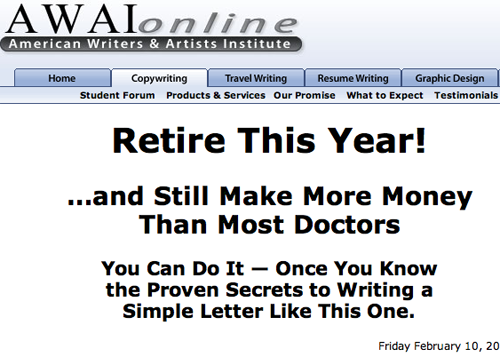 It would have been pretty pathetic if copywriters selling the “secret” to copywriting were unable to put together a good yarn. Happily, they do a good job of storytelling, full of empathy for downtrodden workers and optimism for the future of anyone with the foresight and intelligence to sign up.

FREE White Paper: Learn how to optimize every page on your site by downloading our FREE 12 Master Landing Page Templates white paper. For even more on landing pages, download our FREE Landing Page Handbook and our Rapid Conversion Landing Page Optimization that Sell white paper.

Personally, I don’t see that this site needs a whole lot of Internet bells and whistles. Some Web designers experience a difficult-to-resist urge to use technology just because they can. They’ve used admirable restraint in this case. Just enough webification to get the job done, but not so much that it would be confusing.

Once you venture into the clutches of AWAI, they are very good at keeping you. You get previews of what’s coming up, you get the free Golden Thread email newsletter, and a lot of other interesting tidbits, not the least of which is a pitch to help you become a romance novelist… no matter if you’re a good writer or a poor one.

They’ve done a great job on their testimonials. There are plenty of them, they’re prominently displayed, and they are by people who sound credible talking about how the course has helped them make money and live a more rewarding life. Great stuff.

The links really don’t have much flash, but they do get the job done easily and quickly. There’s no mistaking what the links are designed to do and mechanically they work quickly and efficiently. Also, the “order now” buttons could work much higher in the copy. This is pretty compelling stuff. Why make the prospect go all the way to the end before allowing him/her to buy?

7. Labeling and Language – A

Again, if anybody should be able to come up with clearly understood copy, it should be somebody who’s selling a copywriting course designed to provide students with the skills to grab six figure incomes out of the thin air of commerce. The labeling and language is easy to understand.

I like the design of this site. Just about anyone can read and absorb the message. The typography is attractive and the site is uncluttered.

An offer to help you make more money—especially in the amounts discussed in this letter—creates its own kind of urgency. We all need more money… and we usually need it right away. There’s not so much to imply freshness in this landing page, unless it would be the day and date function under the headline. That, however, really doesn’t do much other than let people know that AWAI’s programmers know how to do that. The impression is that this copy will be pretty much the same if you bookmark it and come back in a couple weeks. Of course, that might be OK. You’ll probably still be interested in that six figure salary in a couple of weeks.

The site loaded up quickly, well within the 15 seconds specified in the Mequoda guidelines.

The copy is so neighborly and conversational, perhaps it would have been good to toss in a photo of Paul Hollingshead, co-founder of AWAI, and the guy who signed the letter… or maybe some of the testimonial folks, just to lend some humanity to the offer.

AWAI knows how to ask for the order and explain the offer. People out there in direct response land have been trained by us copywriters over the years to respond to certain language and to expect certain phrases. One of those phrases really bugs me (OK, so I’m a little picky). The term, usually tacked on to a laundry list of features/benefits is “and much, much more” or some variation thereof. Why would six- igure copywriters stoop to such wretched bunk? They’ve just provided the prospect with a whole specific list of what he/she will receive…and now there’s some mysterious “much more” that they’re not going to reveal? It was the one glaring mistake and should have been snatched out of the copy…six figures or not. 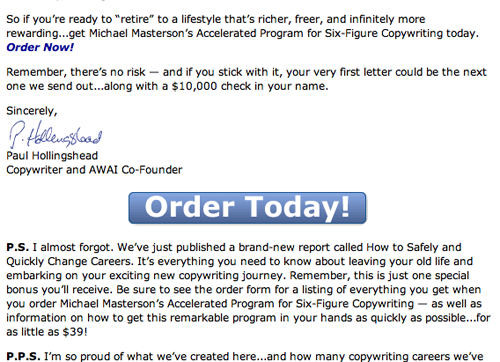 This is a great, compelling landing page that does just about everything right. I still can’t tell my friend if he should enroll or not…but I bet a lot of people do sign up.

Your analysis of the “AWAIOnline Copywriting Course Landing Page” was perfect, extremely accurate on all significant details of their copy. They do have compelling text. I especially like their inclusion of “P.S.” after their complimentary close. It adds an additional “hook” for the undecided — if the reader has gone that far, they can “reel them in” at that point.

Yes, I invested $49 to explore their offerings with the intention of extracting as many bonafide tips and traits for the talented. However, within the confines of their introductory material, they continually offer the ultimate training and “much, much, more secrets” in their “AWAIOnline Copywriting Course,” which is too expensive for me to invest in at present.

My hope is that I can start here, and with assistance from other Internet providers, free of course, to launch myself into one of the lucrative fields that appear to be available. After some successfully completed projects and compensation, then I can venture forth for additional self-improvement.

I love to write, but for blogging and website text, I truly don’t know what to write about without notable expertise. I am seeking to connect with a client or two who would provide their topic, needs and specifications. Then, after an “electronic handshake” I would reciprocate with my very best effort.