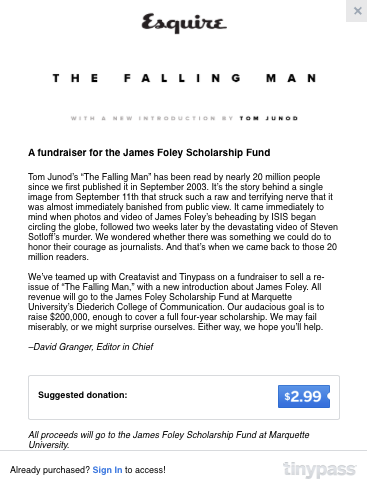 Esquire has launched a new paywall featuring “The Falling Man” from 2003’s story of the September 11th attacks, reports The Huffington Post.

The story, written by Tom Junod, is the main focus of the new paywall. Esquire is asking for a donation of $2.99 for readers to continue reading through the entirety of the article. Readers don’t have to pay to access all of the article’s content, but if they do choose to donate, the money will go to a good cause. “The money will go toward the James Foley Scholarship Fund, in honor of the American journalist who was beheaded by the Islamic State militant group in August,” states The Huffington Post.

Junod sees a relationship between the image of The Falling Man and the image of Foley being beheaded by ISIS captors. Esquire believes that such images “act as records of truly historic, world-changing moments.”

Read more about the Esquire paywall at The Huffington Post.