As buttoned-up and straight-laced as we like to be, this won’t be the first time we’ve written about Playboy. Hey, they’re a publisher just like the rest of us, right?

Back in 2008 at an MPA-IMAG conference we attended, Scott G. Stephen, General Manager of Playboy Enterprises had just launched PlayboyU,a social network that he set up in LA, where the operators wouldn’t have any access to the larger organization. He spoke to publishers, telling them that adopting a start-up mentality in a large company is key.

“We get our butts handed to us all the time by young, fast people,” he said. In a large organization, there isn’t much room for creativity – you can’t get anything done. So when they launched PlayboyU,  they ran the business like a start-up. He reminded publishers to be flexible and fluid about making mistakes, but warned them not to make the same mistakes twice.

Let’s just say that his social network didn’t quite become the new Facebook. But was it supposed to? Nah.

So rather than fighting the competition, Playboy just recently joined the ranks of companies creating game apps for Facebook by launching Playboy Party. Controversial, considering any high school kid can get an account, but it’s not exactly all that risque. As Christina Warren from Mashable put it, Playboy Party combines ” the social elements of FarmVille and some of the mechanics of a game like The Sims” and can best be described as “what would happen if Darren Star (creator of such television classics as Melrose Place and Beverly Hills, 90210) had a Facebook game. It’s over-the-top, trashy and a lot more entertaining than it should be.” 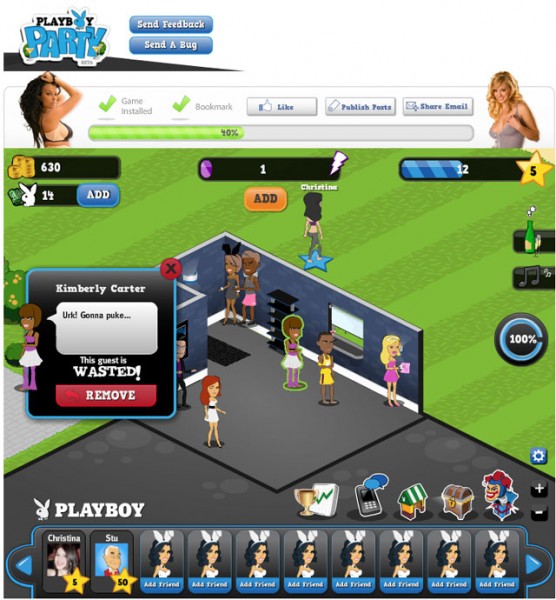 What can you cook up? And by the way, what do you think about Playboy on Facebook?