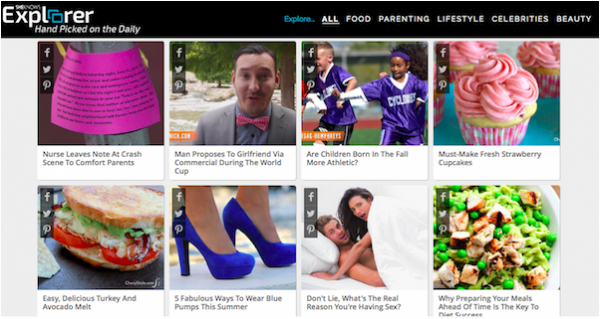 The current state of content-recommendation platforms is spotty, at best, and publishers are gearing up to solve quality-control problems while generating more revenue.

Digiday reports that women’s lifestyle publisher SheKnows has launched its Explorer system, which curates links to outside content.

“SheKnow’s pitch is that Explorer only lets in publishers that are handpicked and premium. When the user clicks on an article in the widget, a new screen pops up with relevant suggested content arranged Pinterest-style, theoretically leading readers to spend more time with the participating publishers,” Lucia Moses writes.

“SheKnows contends that Explorer users click on at least 25 percent more content than visitors from search and social media. ‘Every one of those new users will have higher engagement than other sources of traffic, so it’s a much more valuable user,’ SheKnows CEO Philippe Guelton said. There are 40 publishers using Explorer, including Food & Wine and Kitchen Daily.”

Other examples of recent content-recommendation platforms include Evolve Media’s Crowd Ignite and ZergNet.