Too many offers are spoiling the broth

What is a “lifetime” product? At Scientific American, it’s their brand-new all-access bundle of print magazine, digital and a massive 150,000-article archive, dating back to the magazine’s first issue in August 1845.

An archive like that is rare – Scientific American is the nation’s oldest continuously-published magazine – and we understand Scientific American’s thinking on the value it provides to its subscribers. Christian Dorbandt, VP of consumer marketing there, told minonline.com last month, “While we’re asking $99 for this product, which is considerably more than our other subscription packages, we believe we’re rewarding our brand loyalists with exceptional value because we believe this is a lifetime product with concern to our content.”

It’s always a good idea to reward your best customers. And that archive has proven valuable in the past, as Scientific American has previously used anthologies of articles by rather famous contributors such as Albert Einstein as powerful premiums.

But it’s at the point where Scientific American has to decide on the value of a “lifetime product” that things have gone off the rails. We write a lot about decoy pricing, AKA contrast pricing, but it works best with three offers – and Scientific American is now offering four.

First, as most marketers know, offering consumers too many choices can cause paralysis by indecision. Paralysis is a very bad thing when it’s your potential customer who’s the victim! Second, by spreading the choice around, Scientific American risks diluting the number of people who are influenced by the decoy pricing to choose the higher-priced options.

Here’s how the offer choices look:

Further, is a digital edition worth $15 more than the print product? It may make sense for publishers, but it’s completely counterintuitive for potential subscribers. And making the archive worth $40 more than the print + digital combo also goes against our experience with values that consumers are willing to assign to archives.

We do understand that Scientific American’s audience may be different, and that there may even be organizations that are willing to pay that much. We don’t have access to Scientific American’s data, but we’d be shocked to find that the All Access product is being taken by even 10% of their subscribers, which is the generous assumption we made in the model below.

With all this said, we believe we could generate more orders and more revenue for Scientific American if we were setting prices. Here’s how the model looks for the existing price points, based on our experience (prices have been rounded to make the model easier to read):

The lowest price point, for print, would get most of the orders. This is not how you generate your highest possible revenues!

Instead, here’s how we’d price their products:

We anticipate more orders, making the response index 1.3. Then, with decoy pricing driving more orders at the higher price point, we’d see an extra $10,200 in revenues above the base case of Scientific American’s existing prices.

Scientific American could also price the first two products identically, and still generate higher revenues, though not quite as much as the model above.

For a third option, if management really believes their audience will pay more for their products, we’d return to the three-price strategy with decoy pricing, this time with higher prices.

If anyone at Scientific American is reading this: We love you. We want you to succeed. We beg you to try a different approach and make lots and lots more money!

Scientific American does an acceptable job of promotion its new bundle, giving a banner ad a prominent position at the top right of the home page. 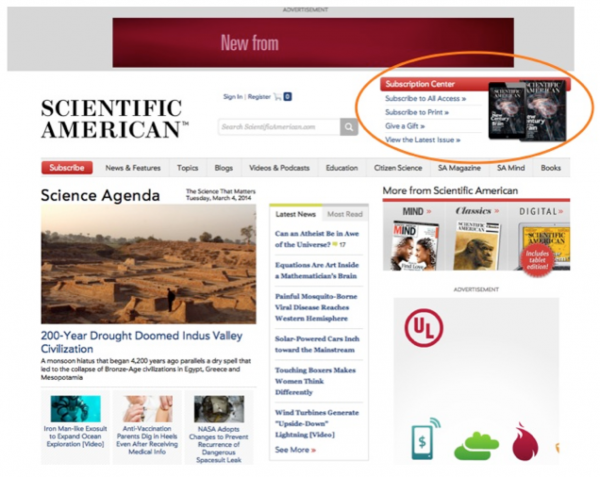 And we especially like what happens when you hover your cursor over each option: You get a small promotional message individual to each of the three subscription options in the banner. It’s one more opportunity to convince a hesitant consumer to buy!

The message for “Subscribe to All Access” notes, “Every Issue. Every Year. 1845-Present.” Those six words are pretty darn compelling, even for someone normally not interested in science.

For “Subscribe to Print,” the message reads, “Save up to 65% when you subscribe today.” When you’re only allowed a few characters, you can’t beat the “S” word and a large number like 65%!

Finally, the “Give a Gift” option delivers the message, “The perfect gift for any holiday or occasion.” Just a reminder that it’s, you know, perfect.

That said, we have one quibble. The publisher makes it hard for customers to find out about the other options besides the new All Access and print offers (and remember print is the lowest price!). The graphic that explains all four options is only discovered by going first to the Current Issue Page, and then clicking on the “Subscribe” button there.

Perhaps this is how Scientific American is trying to solve the indecision problem created by having four offers: Make it look like you only have two. Of course, when you contrast your lowest price with your highest price at 75% more, the results probably won’t be pretty for that top price product.

In addition, the gift option available on Page 1 only allows you to give the print edition. This is a bit surprising, given the value and appeal they believe their “lifetime” product has for science lovers.

In any case, this is a fascinating case study and one we’ll be following closely. In six months or so, when enough data has piled up, you can be sure we’ll be begging the folks at Scientific American to share their results with us, to add to the documentation we all need to do our jobs.

In the meantime, what do you think of having four offers? Good, bad, or indifferent? Have you tried it, and if so, what were your results? We want more real data!

Two years have passed, but your analysis remains interesting. Except that it seems Scientific American doesn’t really want to market their product in the first place. And to see their offers on their webpage, first a prospect must visit it.

Last year I subscribed at a very deep discount offered through a subscriptions service, but it was digital-only and I promptly forgot that I had it. I received NOT ONE EMAIL from ScientificAmerican.com confirming my subscription, nor notifying me that a new issue was online, nor any offer. In March I got an email (which I confess I must have overlooked) asking me to confirm my address. It’s the same address that they have on record now, and a Customer Service rep supposes that I got the email because I hadn’t accessed an issue in 10 months. (We aren’t sure, because the email says nothing to that effect.)

The question is obvious: Don’t they WANT subscribers to visit their site? The expense of sending and managing a monthly email and/or a confirmation or reminder is nil. They haven’t even marketed to me in hopes that I might renew at their full price — even as I log in and their own system shows that my subscription expired in May. (Scientific American is no longer available through the service I used.) Sorry, SA, I’m interested in an article from 2014, but am not going to pay $10 for it, nor $30, $35, $40 or whatever you now get for a subscription.

I’m already too awash in pixels and paper to add to my clutter at that such a price. I’ll stop by the library, thanks, if only as a matter of principle.

Randall–thank you for your comments and feedback. Your input highlights that with online multiplatform publishing, we can’t just “build it and they will come.” Publishers should engage with readers…by email, by phone, by mail–whichever channel connects subscribers/customers with the publisher’s brand and content. Creating content that is valued means enticing readers to consume the content. Thanks again for your input. Bill Dugan