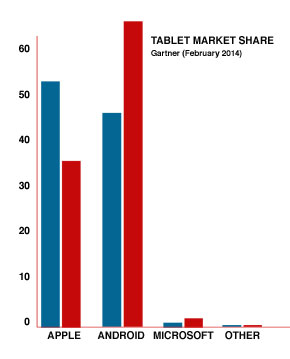 Have the tables turned? According to Gartner, Android tablets now own 62% of the market. D.B. Hebbard  from Talking New Media breaks it down and lets us know that publishers haven’t noticed the shift. Hebbard writes, “According to Gartner, Android tablets now enjoy an almost 62 percent share of the market, while Apple has fallen from over 50 percent to less than 40. Critics of the report have said that Gartner’s number don’t seem to jive with what Apple reported, with around 4 million tablet sales missing from the report. Gartner reports that Apple sold just over 70 million, while Apple reported 74 million sold. But even using Apple’s numbers, Gartner says that Android tablets accounted for over 120 million units sold.”

One of the most interesting things that Hebbard reported was when he talked to a marketing company that dealt with consumer packaged goods. They said that, pertaining to users, “iPads tend to be buyers, while Android owners lagged behind.” You can read the rest of Hebbard’s report on Talking New Media.