About two weeks ago, we took a day off to go to Logan and meet our new pug puppy. Parker arrived via American Airlines from Tulsa, OK via Chicago. Parker the Pug was found, purchased and adopted entirely online.

About a week prior to his arrival at Logan, Gail and I got up on a Saturday morning to go pug shopping. Gail started with the newspaper classifieds and found nothing. She promptly switched to Google and entered the keyword phrase “Boston pug breeders”. While several sites popped up on page-one in Google, only one listing was present in both paid and organic search:

The site had a huge selection of dogs (all pug puppies) listed by age, complete with photos and profiles. We debated briefly whether the site was local and then called to find that the site was national and represented a network of breeders from all over the country. Of the two puppies we liked best, one was from Texas and the other was from Oklahoma. The organization is called Pure Bred Breeders and operates dozens of websites specific to individual breeds and states. When we Googled “pug breeders in Sacramento” we got:

It took several calls to conclude that our puppy adoption process was going to be digital. We were impressed with the selection, the screening process for the network, the health certification, their flight center and more. What we were not impressed with was our inability to hold the puppy before the adoption.

Gail finally found a good breeder in Rhode Island with two pugs, one of which she liked… but not as well as either of our two online favorites. So I said to Gail, “If we drive to Rhode Island, you know we will fall in love and come back with a dog. Seems to me that this is no different than picking your favorite from the online photos and descriptions and having him flown to Boston.”

Our son Ryan was woken for input and agreed the digital option made the most sense.

So a few hours later, adoption papers were complete and Parker was ours… and it said so on his web page which Gail promptly emailed to all our friends and family.

I thought about the business implications of what we had just done and that it plays out 400 to 500 times per week with Pure Bred Breeders.

Winners: The breeders who get top dollar and no people waltzing through their homes, the buyers who get a much better adoption experience (for a few dollars more), the dogs who go to good homes at the right time and must be raised to meet the standards of the “adoption agency,” and the airlines who fly the puppies in a special temperature controlled compartment designed originally for transporting show dogs.

The losers: Regional newspapers who have lost yet one more source of readership and revenue.

Parker is sleeping under my feet as I type.

All things in life should be so simple. 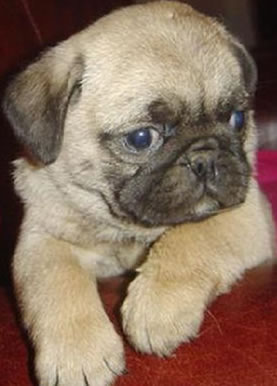 1) How do you know Parker’s mother isn’t squashed into a filthy cage, with her own defecation stuck to her, in a puppy mill somewhere, a breeding machine? That’s the behind-the-scenes reality of many of these “online breeders” and puppy suppliers.

2) You didn’t read about how Delta Airlines lost a family’s dog recently, and didn’t even bother to go and have a proper look for it (it’s still missing)?
http://www.care2.com/causes/animal-welfare/blog/petition-delta-airlines-to-please-find-paco/

The point of this post was to show the changes in commerce, communications and community driven by the Internet… I think most of the folks who have commented here and to me via email and in person got that point based on their comments… It does seem a few readers either missed it or have some other issues to air that are important to them. All comments are welcome.

And for what it’s worth, I did a fair amount of diligence on the process (breeder, vet, flights, etc…) and was impressed with every person I encountered. I had many of the concerns mentioned as I began the puppy adoption process.

I have adopted many dogs and cats over the years (from pounds and breeders) and this experience was as good as any, and better than most. Our family vet says Parker is the picture of health. Gail and I start puppy training with Parker next week. 🙂

To understand the magnitude of numbers of unwanted (but perfectly healthy and homeable) pets that are put down, Google “animal shelters” by state.

In Australia alone, a quarter of a million unwanted cats and dogs are led down the corridor to face the euthanist’s needle every year (or, in some pounds, are shot in the head; in some states in the US, pounds still destroy animals in gas chambers). That’s just Australia; and we only have 19 million people. And those are just the official figures. Many pounds and shelters don’t submit their figures, or they fudge them.

Many pounds kill the majority of animals entering into their possession. And, Don, many of these animals are purebreds. Bought online from “breeders” (many of which are really puppy mills) or in pet shops, most of which source their “stock” from puppy mills.

Take a look at the reality: http://www.deathrowpets.net

For every puppy you cause to be bought online, from breeders/puppy mills, or from pet shops, you’ve potentially caused a death in a pound. That’s the stark reality.

I do hope you will publish the comments I submitted.

I think people have missed the point of this post – or have I?

I think Don is hust saying that there are online business opportunities everywhere.

First of all, I do not believe your business is the appropriate avenue to promote buying any live animal online. Shame on you. In addition, how could the breeders possibly know that these puppies are going to good homes, since it’s all done online and who is monitoring these standards of the “adoption agency” and what are they? Have you ever seen how dogs are transported on airlines? You make it sound like a luxurious private plane. It’s the cargo hold. It’s sad that people want all of these “it” dogs, because so many of them end up in shelters like Jonathan said.

I purchased a pure bred chocolate lab entirely online. I was living in Los Angeles …and purchased my dog Buddy form a breeder in a very small town in Alabama.

Great experience would and will do it again. Gotta love the digital world!

You left out the main losers – the pound puppies, millions of whom will be put down this year.