The lovechild of Adobe & Yahoo! means making money from your freemiums. Let’s call them money-ums.

There’s a new advertising train coming to town, and guess who isn’t on it? Google! We’re not sure if Google hasn’t discovered this method (unlikely) or just preemptively decided that it’s not a big enough revenue generator. But if you consider the contributors to this project, and the potential it will offer publishers, you can’t just look away.

Adobe and Yahoo! have partnered to integrate contextual ads within all of your PDF documents. The ads show up on the right side of the PDF, not interfering with the text, but as an extra sidebar that shows up along the content. According to Adobe, the program has the potential to offer readers access to more free content, “enhanced” with ads that match their interest. 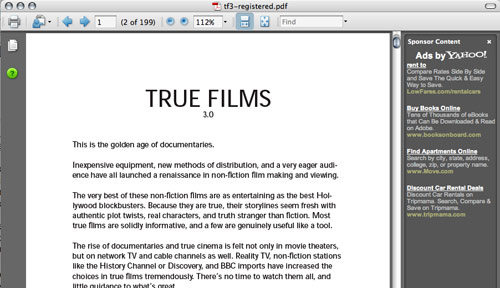 The service gives PDF publishers access to Yahoo!’s network of advertisers and allows them to make money off the content without having their own sales force or having to do the ad insertion themselves, says Josh Jacobs, vice president of publisher solutions at Yahoo!.

Online publishers generally have their fair share of free reports, freemiums, etc. that in the past, have had the exclusive goal of extracting email addresses. Well, if you’re looking to generate a little ad-sponsored revenue, doesn’t this look enticing?

As an example, Author Kevin Kelly has a book called True Films 3.0. If you wanted to purchase the previous edition, True Films 2.0

, you’d need to hit up Amazon.com or Lulu.com where he self-published.

For 2008, it seems Kelly decided he’d go this route and offer the free ad-sponsored version of his newest edition. You can download True Films 3.0 or visit his site kk.org.

According to Adobe, publishers already committed to participating in the Ads for Adobe PDF Powered by Yahoo! beta program include: IDG InfoWorld, Wired, Pearson’s Education, Meredith Corporation, Reed Elsevier and many more.

To be considered for the beta version of this program, publishers can apply to participate at: advision.webevents.yahoo.com/adobe/

One negative aspect is that in order for readers to see sponsored ads in PDFs, they will need to upgrade to the most recent version of Acrobat (8.0). Until then, readers will still have the option of denying Adobe’s request to display “sponsored content”. And what user would be willing to download and re-install a program just to look at ads?