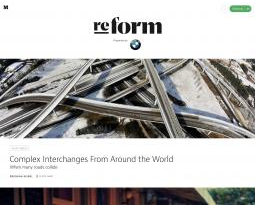 Ev Williams’ Medium, the long-form publisher that launched as a platform, is making its move into monetization by partnering with BMW on a native advertising package.

Ad Age reports that the “re:form” collection, which rolled out yesterday, will span six months and 100 posts about design, each with BMW’s branding attached. The stories will include video and a “Presented by” tag for the automaker’s 4 Series Gran Coupe.

While the campaign marks Medium‘s first revenue-generating effort, its leadership says they’re looking at “re:form” with the site’s big picture in mind. The publisher’s next sponsored collection could center on music.

“We’re in exploratory moment,” Senior Editor Evan Hansen told Ad Age. “It’s not about the money, it’s about the experiment.”

According to comScore, Medium saw more than 833,000 unique U.S. visitors in June. Google Analytics, meanwhile, pegged the number at 6 million.