How to build the best executive publishing teams using the MBTI

In previous posts, we’ve talked about how using the MBTI can impact the development of your multiplatform publishing team. We’ve also discussed how different personality types can work better together in the workplace.

We’ve established that every effective multiplatform publishing company should have eight executive positions. If you’re a small niche publishing company with revenues less than $1 million per year and you’re the only employee, then you’re doing the job of all eight. But, for example, if you have one executive plus yourself, then you will have one or more of those jobs taken off your plate. The goal is to fill all of the positions, in the order below. I’ll explain why, later.

Some of these roles combine naturally. For example, the CAO is the COO doubled up. The CSO is often doubled up with the CEO or your CMO. One point of discussion that we come across is the difference between a manager and an executive officer.

Knowing the difference will help you build a team with the right tools for the task.

If you’ve been reading this series, you know that we recommend that publishing companies use the MBTI to screen new hires. It will help determine where certain candidates fit best. Once you’ve done this, hire the people the most unlike you in personality type and skillsets. Don’t hire someone just like you.

Most importantly, hire to lead revenue, don’t attempt to reach your revenue goals and then hire; You will get to that level having hired the right officers. In the graph below, you can see which executive roles account for the next level of revenue. In other words, this is the order in which we suggest you hire your executive team. 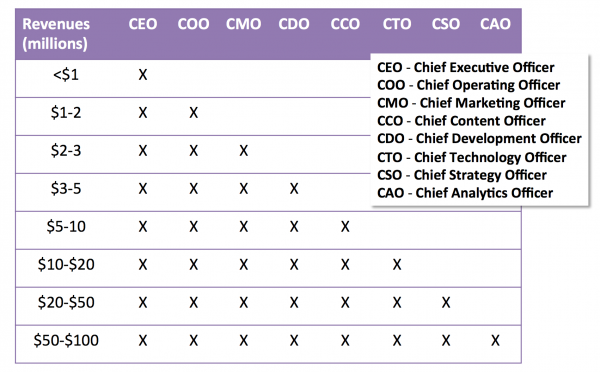 There’s no such thing as a perfect personality type for any given role in an organization. There are, however, types that have consistently proven to have above average chance of success in certain roles.

Below is an example of a small, niche multiplatform publishing team. In the graphic you can see the MBTI profiles of the senior executives in our composite case study. According to our chart above, this team generates between $3-5 million dollars per year in revenue. 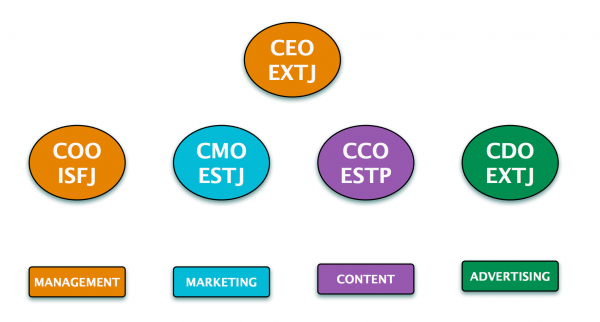 While there is no “ideal” team profile, this team profile is one of a very effective executive team and similar to many effective leadership teams we’ve coached over the past 20 years since we started to use the MBTI as a team building tool.

You might notice X above (EXTJ), but X isn’t a personality type; it means that the person can be either/or. In the examples above, X is in the second position for both the CEO and CDO roles. This means that someone who is either S (Sensing) or N (Intuition) would be a good fit for each.

Below is how an ENTJ would look on the MBTI. You can see that most characteristics lean toward the left side, for E, T and J, whereas this CEO leans heavily toward the right as an N. 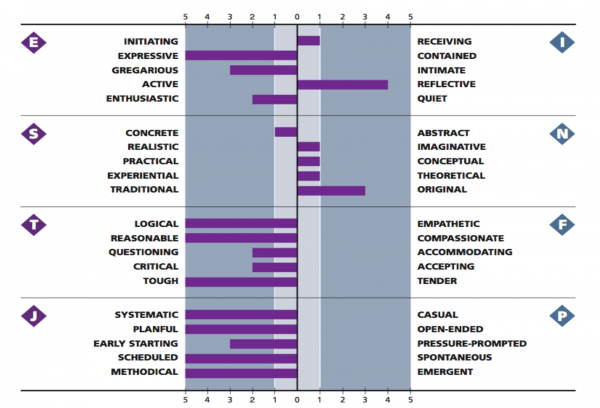 We find that the COO should have a strong S and be able to see the reality of any situation and figure out how challenges will get accomplished. They may be less of a people person – that’s the I (Introvert) – and be more focused. A CEO will always be high on the T and J scale. They have a low tolerance for irrationality and wants things done.

And if you’re still wondering what all of this means: 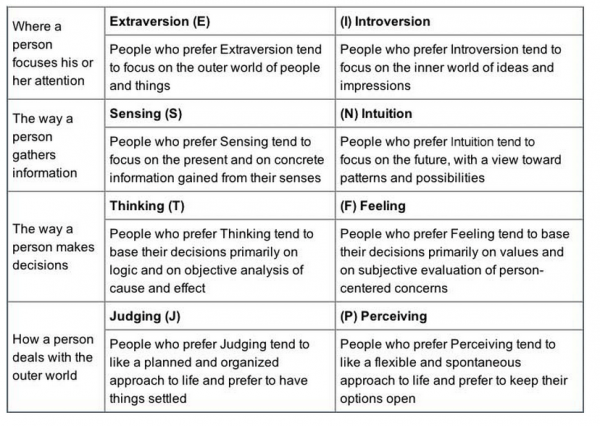 The MBTI is an excellent tool for building successful teams. This is the final part in our multiplatform publishing teams series using the MBTI. Have you read part 1 and part 2 yet?