Taunton’s Fine Woodworking launched in 1975 as a black-and-white quarterly, followed by books on woodworking.

A few years ago, they started publishing special newsstand editions, which they now do seven times a year. Most are created from repurposed content from the magazine.

They have been producing video for 20 years and with the advent of DVDs, finally turned a profit on their video content. They also have a membership website at FineWoodworking.com.

Fine Woodworking, the first Taunton Press magazine, began its life on the kitchen table of Sue Roman’s parents at a time when there wasn’t much information for people who wanted to make furniture “the real way, with real techniques and with real tools,” says Roman, now the company’s CEO. “So it struck a chord at the time. A lot of hippies and a lot of executives – paper pushers who wanted to get into something ‘real’ at the end of the day — were getting into woodworking. So it was good timing.”

The magazine launched in 1975 as a black-and-white quarterly, followed by books on woodworking. That was partly an economic model,” explains Roman. “People pay for magazine subscriptions ahead of time; book publishing was a good complement, because the cash continues to come in for a couple of years.”

Because the magazine content generally holds up, there was a huge demand for reprints and back issues in the early days. Then, the publisher bound a year of issues to sell in book form. After a couple of years, the material was organized around subject areas rather than issue date. At last count, the Fine Woodworking brand was on its seventh series of magazine reprints in book form. “Both ‘The Best of Fine Woodworking’ series and ‘The New Best of Fine Woodworking’ series seem to be very evergreen,” says Roman.

“We also publish authored books and, after 31 years, have about 150 active woodworking titles on the market” she adds. “A couple of years ago, we started publishing special newsstand editions, which we now do seven times a year. Most of those are created from repurposed content from the magazine — and sometimes from our books — but with a special focus.”

Since woodworking is a very tactile activity, with a lot of body movement and techniques, Taunton created 60-minute videos about 20 years ago. “For the longest time, we couldn’t find a good way to sell them,” says Roman, “but we knew that video was a very good way to teach woodworking. So we had a video department for all these years but it never resulted in a viable product…until recently.”

With the advent of DVDs, Taunton now has an effective way to sell videos. “The market is not huge, ” she says, “but people are willing to spend money on DVDs where they weren’t for VHS or Beta. They like the accessibility DVDs allow, where you can go directly to the exact areas that you want to watch. So the DVD market has revived, and most of those are sold directly.” 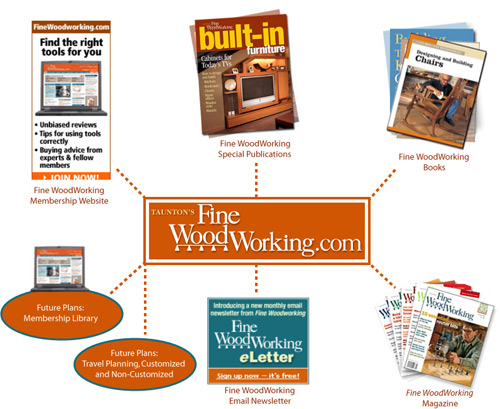 Fine Woodworking has had a website for a number of years, but Taunton decided that it should test a membership model. FineWoodworking.com was relaunched as a membership site in April 2006 at a price of $34.95 (the price of a one-year subscription to the magazine) or $4.99 a month. “We have 31 years of information — a lot of which holds up,” Roman says. “We have more than 1,100 articles that are still good, we’ve been producing video for 20 years, and we have relationships with the best woodworkers in the country. We offer daily content, blogs, contact with experts, and tool reviews that people contribute.”

Since Fine Woodworking has a database of 200,000 subscribers and access to 75,000 more on the newsstand, the first place the publisher pushed the new membership site was to its current magazine readers. “We came out with a marketing campaign, called ‘The Perfect Dovetail,’ that convinced people to subscribe to both the magazine and the membership website for an additional $14.95 above the $34.95 magazine subscription price,” says Roman.

“So the brand is growing,” she says, “and we’re eager to see how far it goes and how much it grows. We’re putting more emphasis now on the advertising component and plan to use the same model (or a variation of it) for our other brands. Besides Fine Woodworking, Taunton Press publishes Fine Homebuilding, Fine Cooking, Fine Gardening, and Threads. All offer a similar array of products — some more robust than others, depending on the market.

Magazines: Fine WoodWorking has over 200,000 subscribers.

Books: They publish shop reference books called Taunton’s Complete Illustrated Guides, a series called The New Best of Fine Woodworking, their Furniture Project Series, and a beginner collection for “Getting Started in Woodworking”.

DVDs: $19.95 DVDs are available of their woodworking video workshops, profiles, and video tips.

PDFs: Articles and plans are available via PDF as part of a paid membership to the site.

Software: CAD-drawn plans including templates, parts, and measurements for over 50 products are available for purchase.

Video: Video that they’ve been producing for over 20 years is featured on their membership website in clips and available in DVD format.

Website: FineWoodworking.com was relaunched as a membership site in April 2006 at a price of $34.95 per year or $4.99 a month with over 1,100 articles and videos on projects, skills, techniques, materials and everything you need to be a fine woodworker. They also offer tool reviews, in an Amazon fashion that lets the users rate and review, and also includes product specs and related content. They recently started a new community area with free discussion boards, several infrequently updated blogs, and classified ads. The most interesting blog is one made up by the users, called “GlueTube: Viewer Created Video” where users post their own home-made and found videos on woodworking.